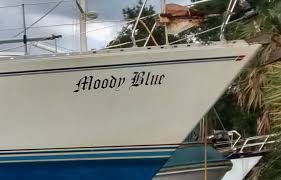 Two policemen knocked on the door at midnight. It was their unfortunate duty to tell Mum and Dad my sister was missing somewhere in the Pacific. A mayday was heard, a position received, but since then, nothing. The coppers were after information about the boat, p.o.b., probable destination and e.t.a. After a stunned silence my parents realised this was not about their daughter. As far as they knew, she was safely moored in Durban, waiting for a weather window for the next leg of her voyage. In those long-ago days when SSB was boating’s primary long distance communication, there had been confusion about a common boat name. We never found out what happened to the Andromeda that called for help that night.

Choosing a boat name can be even trickier than naming a child. Apart from the sound and meaning of the name, consider the radio transmissions you might engage in. Your call sign should be clear and unmistakeable to the listener, perhaps working through static or poor reception. Shore station operators have a propensity to guess at a familiar-sounding name, rendering even simple names into something totally different. Our Zeston 36 Amica was often called Omega by shore stations unless we spelled the name phonetically each time.

It might seem amusing – until the real Omega is overdue and searches are organised based on information about Amica, or vice versa. But how many boats are called Andromeda, or Wanderer, or Dreamtime, or…These names are popular because they sound good, but we need to consider the consequences of ambiguity.

Ideally a boat name should be fairly short, unique and spelt reasonably phonetically. If you plan to go on radio skeds you’ll be called sooner if your boat’s name starts with a letter near the beginning of the alphabet. Whatever the name, it’s worth memorising the correct phonetic spelling and displaying it near the radio for those moments when you just cannot recall that T is for Tango, not Tom. It is actually easy to memorise the International Phonetic Alphabet. I wrote it out on a card, stuck the card on the dashboard of my car, and used time stopped at traffic lights to practice. Friends have done the same while on long, boring phone calls with relatives.

You boat’s name shows your reverence or otherwise for the vessel. For some it is almost a spiritual undertaking to choose just the right label, for others it is obviously a chance to show off their sense of humour, or in many cases a startling lack of maturity. We see the unimaginative Wavewalker, Wave Dancer, Sea Dancer, Sea Wolf, Minuet, Duet and Serenity crossing paths with the clever, but unflattering SeaRosis of the River (imagine getting that one correct over the air), WTF, Piece of Ship, and others of the same ilk. Sometimes the names reflect a characteristic of the boat, but I do always wonder about the lovely Sea Slug moored in our local marina. What was the owner thinking?