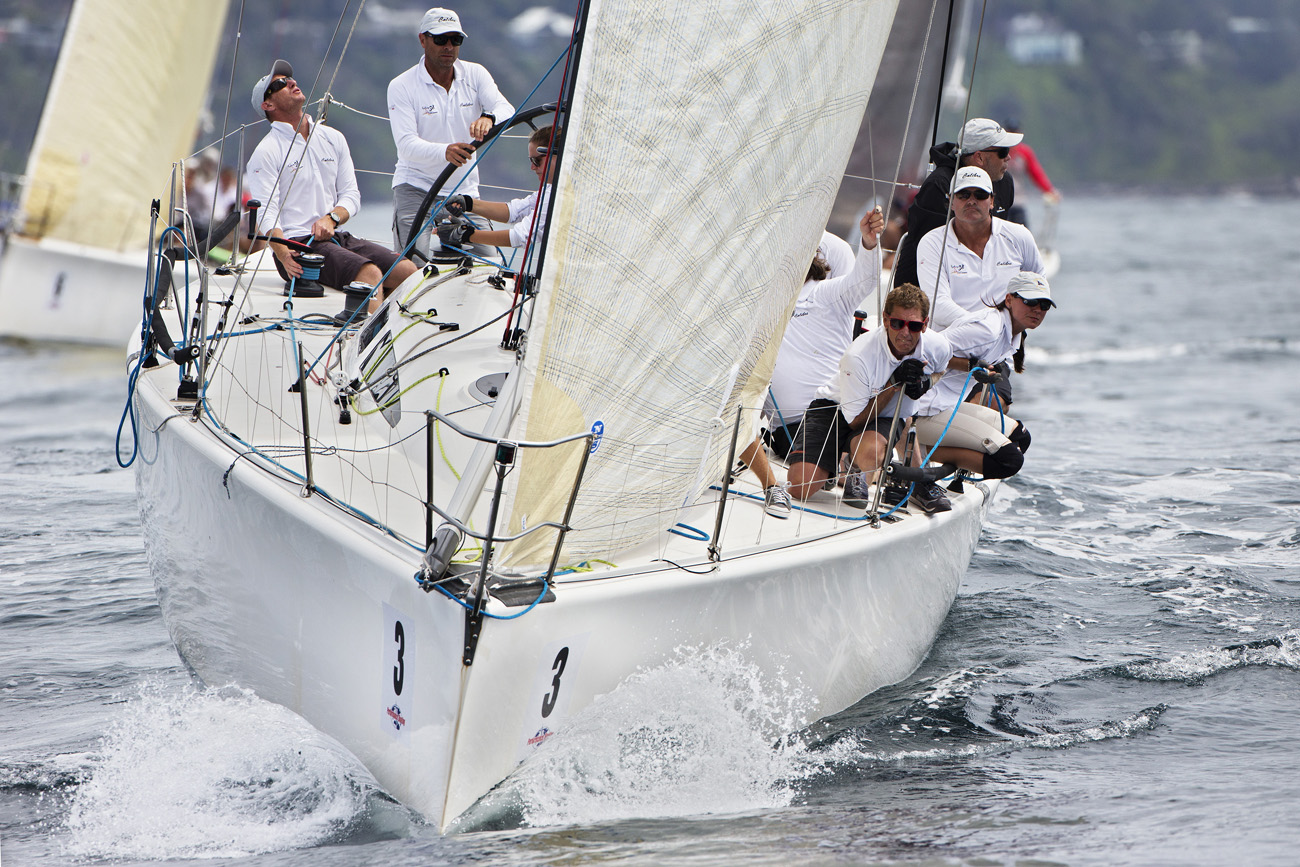 For those awake around midnight last night, a 20 knot ENE gust through Sydney’s northern suburbs raised hopes for day two of the Performance Boating Sydney Yachts Pittwater Regatta. The reality was…well like night and day; another heavy cloud and high humidity fizzer to the east of Barrenjoey Headland and just two more race scores added.

In the Sydney 38 national title a bullet for Brenton and Jen Carnell’s Phoenix from Geelong in race four has them hard on the heels of Bruce Ferguson’s Whisper (RPAYC) and vying for the Lou Abrahams Australian Champion Trophy with one day remaining.

The pair spent all day Thursday training boat-on-boat and setting up for the forecast lights airs. Now the two Sydney 38s are on equal points, Whisper leading on a countback and Mark Griffiths’ Old School maintaining third place overall.

Paralympic gold medallist Dan Fitzgibbon at the helm of Another Challenge made a captain’s choice and went for fluro green crew shirts, similar to high visibility work wear. The team looks like they could be hired out as a road crew, Principal Race Officer Steve Merrington making the suggestion, “they just need to go to Coates Hire and pick up some of those stop/slow signs”. Fitzgibbon agrees, “we need something that indicates ‘stop there, wait for us to come through. Ok you can go now’.”

He says the colour choice is about the crew enjoying their first class regatta, not being too serious and being visible. The Royal Prince Alfred Yacht Club crew is also numbered up, America’s Cup style. “We are trying to call each other by our numbers, but we end up using names.” Talking about performance the skipper reckons their boat, modified to accommodate sailors with disabilities, is heavier than the others, which makes the creep around the offshore windward/leeward track even more painful. “It’s a bit frustrating, but we love being here with everyone,” Fitzgibbon added.

Though the Sydney 38s slaved for the second day in the outgoing tide, patchy light winds and rolling sea the 15 crews are still very upbeat. Co-owner of the boat of the day Phoenix, Jen Carnell, says “there’s nothing you can do about the wind, being here is what counts. We have a great fun crew and everyone likes to hang out together,” she added as the loaded tender pulled out of RPAYC, the Phoenix crew off for a spa then dinner and round table discussion on tomorrow’s decider.

Richard Williams’ Calibre (CYCA) is the leading Corinthian 38, the full amateur crew taking a big win off the teams carrying professionals in race three of the series. Williams counts four years as a co-owner of Calibre and before that raced Sydney 38s for 10 or more years. His feeling is “there’s a lot of one design but with a Sydney 38 you can do windward/leewards and sail them to Hobart. They are very versatile boats. Now the class is 13 years old they are getting a little bit of an IRC advantage; they are still competitive.”

Newcomer Chris Mrakas from Sandringham Yacht Club has dived in the deep end. He bought last year’s champion 38 called Challenge after owner Lou Abrahams passed away and competed in his first regatta as a boat owner at January’s Festival of Sails. Then a few weeks’ later he took on 40 knots during the delivery from Port Phillip north to make it to Pittwater for the class’ pinnacle, the national title.

“We’ve never sailed in such light winds,” Mrakas said dockside at RPAYC today, Saturday February 21, 2015. “We copped 38-40 knots around Wilsons Prom during the trip up, actually we ripped our main and the least wind we saw over the entire distance was 26 knots. Five knots out there today and yesterday is like standing still,” he laughed.

Merrington feels the sailors’ pain. “What do I say? It was just awful out there today. We started race three in SE winds 4.5 knots and even when we shortened it up that race still took an hour and 30 minutes and a couple didn’t finish inside the time limit. After a long wait the second race went ahead in 5 knots out of the east and fluky.”

In the five boat Sydney 36’ fleet scores have Peter Franki’s Saltshaker (CYCA) tied on first place with Steve Hatch’s M, from across the harbour at the RSYS.
Tomorrow’s first race start is scheduled for 1000hrs and the official forecast is easterly winds 10-15 knots. Optimistic say the local experts.

Ron Jacobs from the Bayview based yacht and power boat dealer, Performance Boating, commented: “we are excited to be the naming rights sponsors for this regatta. As former Australian agents for Sydney Yachts and actively involved in the development of the Sydney Yachts range, which resulted in 64 Sydney 38 being sold both nationally and internationally, it’s terrific to see a resurgence of interest in these great yachts.” 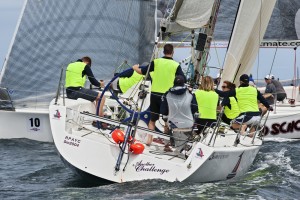 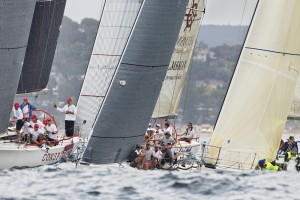 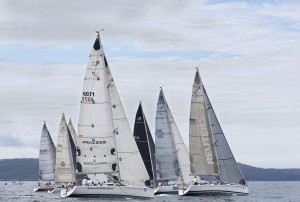