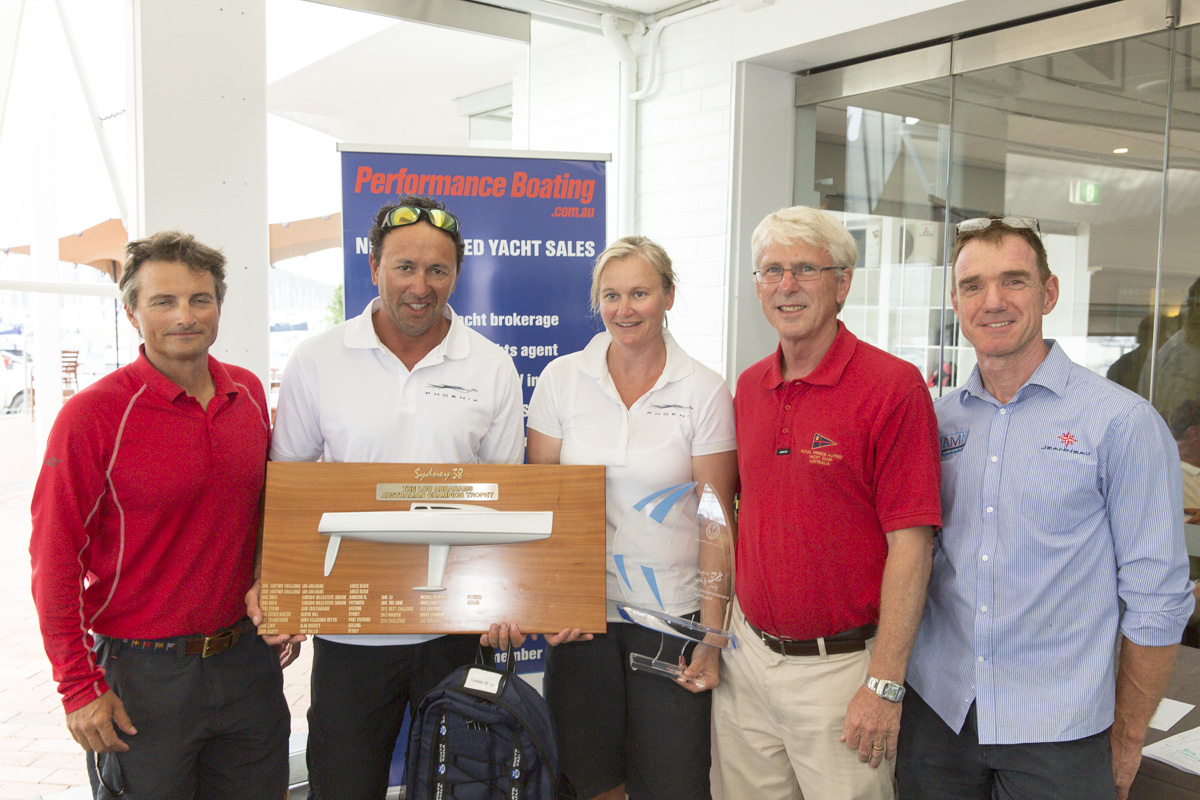 There was no chance the 200 or so Sydney 38 and 36 sailors contesting the Performance Boating Sydney Yachts Regatta were going to die of thirst like the poor souls on Coleridge’s ship in his famous maritime poem, the Rhyme of the Ancient Mariner. Yet three days of heavy cloud, thick humidity and barely there breeze warranted the doldrums reference and amounted to punishing racing.
At the end of a seven race series, well short of the 12 originally scheduled due to the extreme weather pattern, the long delivery from Geelong to Pittwater became all the more worthwhile when Brenton and Jen Carnell’s Phoenix capped off the Sydney 38 Australian title by one point having staved off a late challenge from Mark Griffith’s Old School (RPAYC).
“We thought we lost it on a countback, it was extremely nerve-racking adding up the points,” Carnell said. “The results went right down to the wire and for us it made the preparation and the 500 nautical mile journey so incredibly worthwhile. This weekend’s been a huge learning curve; we’ve jumped up to the next level.”

Carnell’s Royal Geelong Yacht Club crew realised they needed to readjust the boat after day one to have a chance at defeating the locals. They spent Friday evening tweaking and found the extra pace, and went in the right direction on the offshore course thanks to tactician Chris Jones. “All the crew were fantastic, in the light conditions they were pressed down on the leeward rail all the time and maintained the concentration needed to do the job,” Carnell praised.

Cruelly for Griffith, his final series result means a trifecta of seconds at the nationals, all by one point. “We’ll be at the next one in Geelong next January and will try to move up one more spot,” the weary skipper promised. “We did everything we could and we are happy we gave Phoenix a run. They sailed more consistently than us, plus we had a little bit of bad luck in the first race with a big clump of weed caught on the rudder putting us back into last place, until we sent a swimmer to clear it.”

Third Sydney 38 on overall points was Bruce Ferguson’s Whisper from RPAYC and Bruce Taylor’s Chutzpah from Melbourne was declared the top scoring Corinthian, or amateur-crewed boat.
First Sydney 36 in their two-day series was Peter Franki’s Saltshaker (CYCA) then Steve Hatch’s M (RSYC) and Andrew Hurt’s Onya (MHYC) in third overall.
As the 4pm time limit for a start approached, race six and seven rolled off in quick succession making the most of the best wind of the regatta – 7-8 knots from a smidge north of east. By that stage the caravan of 20 Sydney Yachts and officials plus marks and support boats had relocated to “half way to New Zealand” joked the PRO Steve Merrington. In actual fact he shifted the track southwards and further offshore on the ocean side of Palm Beach, north of Sydney.
Having found a wind pocket and determined to keep the momentum going, Merrington started race six under a black flag following a general recall of the fleet, which means too many boats were on the wrong side of the start line to be called back individually. Richard Williams’ Calibre cut it too fine and the flag came down, disqualifying them from that race.

At this evening’s trophy presentation at the host club, the Royal Prince Alfred Yacht Club, the winning Phoenix team received the rededicated Lou Abrahams Australian Champion Trophy named in honour of the four-time winner and class stalwart who sadly passed away last year.
Abrahams’ longtime right hand man Rowan Simpson now races with a skipper he refers to as “another legend of Victorian yachting, Bruce Taylor”. The pair, for 35 years competitors are nowadays wearing the same crew colours and Simpson says they spend a lot of time reminiscing about Abrahams and past regattas and races. “Not a day goes by we don’t think of Lou or refer to him.”
As the last in the 20 boat fleet of Sydney 38s and 36s crossed the finish line this afternoon, Sunday February 22, 2015, crews took to their radios to thank the race committee for a terrific job under trying conditions. In response Merrington thanked them for their patience and also the RPAYC race management team he says “is the best I’ve ever worked with”.
Looking forward, Sydney 38 Association President Greg Clinnick reminds all Sydney 38 owners that a new class rule means from September this year boats can carry 25% bigger mast head kites, making this the last nationals with fractional kites.

Clinnick has also issued a challenge to all 38 owners. “We are pushing for 10 Sydney 38s to enter this year’s Sydney to Hobart with the aim of being the largest one design fleet in the world racing one of the longest and toughest ocean races. Five owners are committed, the association is calling for five more to take up the challenge.”

The class’ 2016 Australian title returns to Geelong and the Festival of Sails in January 2016 where it’s hoped fleets from South Australia, NSW and Victoria add up to 20-25 starters. Next on the Sydney 38 calendar are the Victorian and NSW state titles planned for the same weekend in April, 18-19. The NSW states fall under the Sail Port Stephens regatta banner.

Link to video from day 2 of racing 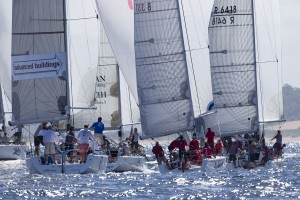 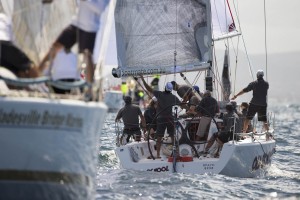 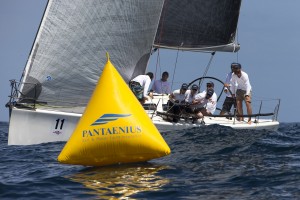 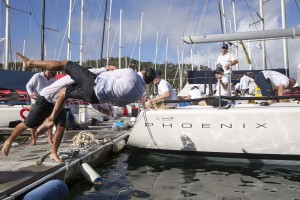