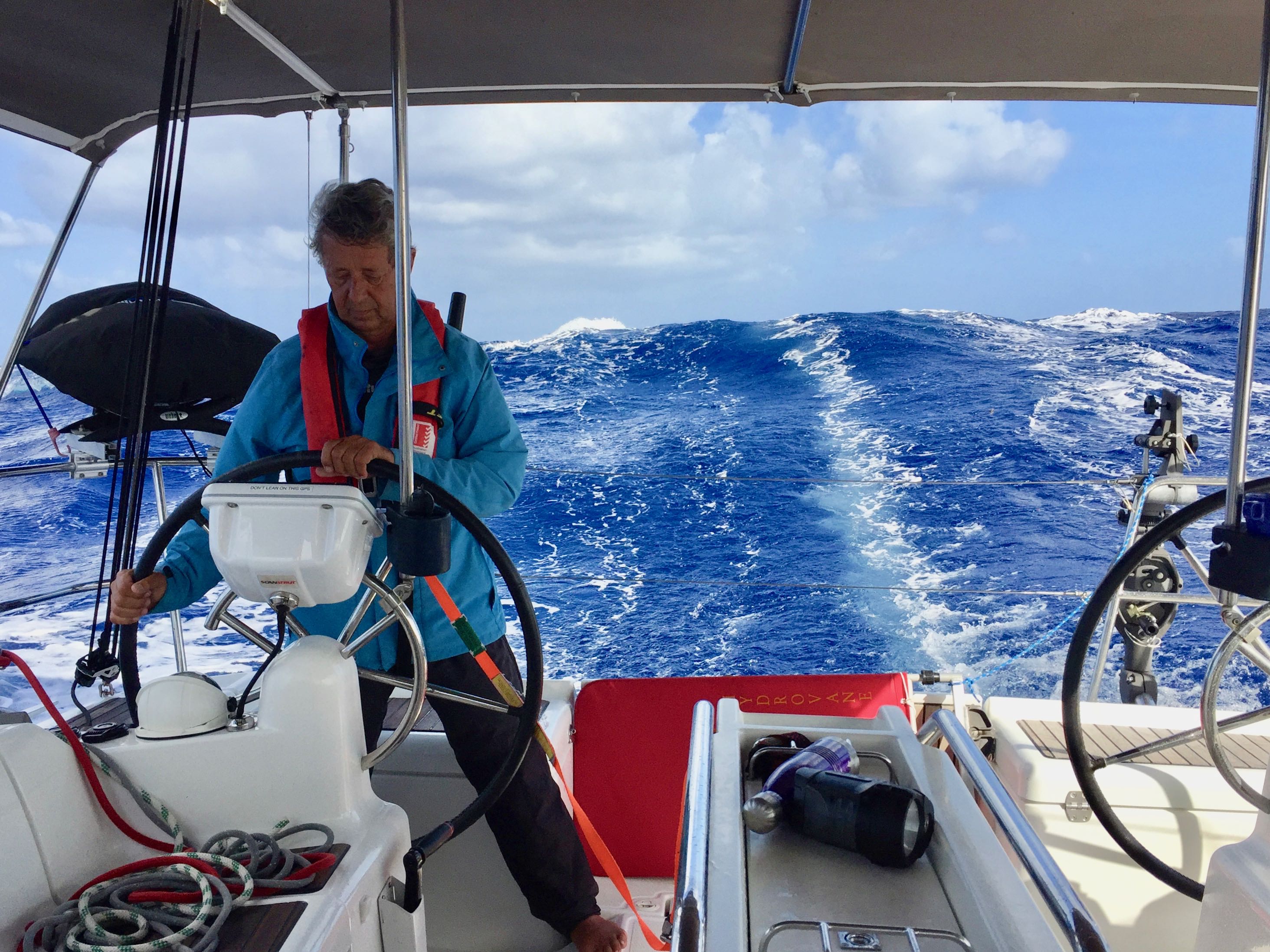 Preparing for heavy weather is an essential element of preparing yourself and your yacht for any coastal cruise of any duration if there is the remotest possibility of being caught out, but in the case of extended coastal or offshore cruising the essential ingredient is to prepare in advance. Having said that with careful preparation there is no reason to ever be caught in storm conditions and there are a large number of people who have done circumnavigations who have never experience more than 35 knots of wind.

Many of us cruise short-handed and inevitably when we do get caught out in a sudden weather change it happens at the most inopportune time, usually just after dark on an overcast night, and probably in rain.

In my own case I’ve learnt to take the following precautions on longer passages:

1/ As part of your preparation make sure that genoa cars, blocks etc are cleaned and lubricated and winches greased as the last thing you want when things go pear-shaped is a winch to freeze or similar

3/ Ensure that everything on board is well secured including books in book shelves as I once had a full shelf offload itself onto me after my yacht dropped off a nasty wave, and it hurt!

4/ Be sure to have jack-lines led and not tight, for two reasons. In my experience going forward in a hurry is much easier with some slack in the lines and also allows you enough tether to move forward to windward and then move across to leeward without having to unclip.

5/ lee-cloths are essential for sea berths and as per the yacht racing regulations bunk boards etc should be secured in some way. If tools and heavy objects are stored they should be secured with straps to strong points in much the same way that battery boxes are. This isn’t just to protect from a highly unlikely roll, but a heavy object moving in a big seaway can do a lot of damage.

6/ Make sure that there are no points of chafe, so where possible protect the sheets and sails from heavy weather chafing. Spreaders should be leathered, stanchions and lifeline ends taped with rigging tape etc

7/ Prepare food, snacks and drinks where they are easily accessible (It’s incredibly tiring on-board a yacht in heavy seas, even if you aren’t physically steering. Even moving from cockpit to down below can be an effort, so having food and drinks easily accessed is a big plus.

8/ Keep as much weight out of the ends of the yacht, so if you have a forward water tank under the v-berth then try and reduce the amount of water in it, and move any other heavy objects towards the centre of the yacht where possible. (In preparation for a 650 beat in 30 knots of wind up the Red Sea I changed my furling genoa to my furling No.3, emptied the forward water tank, and swopped my 20 metres of back-up anchor chain with the normal 50 metres. This all made a significant difference and we had a rewarding beat in 150 miles legs with only one unpleasant spell one night for about three hours where, despite the above, we ended up pounding into a very short steep sea)

9/ Have a grab bag ready close to the companionway and, it probably goes without saying, but make sure that the life-raft is readily accessible.

10/ Have heavy weather clothing readily accessible. Again this may seem obvious, but on the approaches to Singapore I got caught in a tropical storm and torrential rain and was shivering uncontrollably because I had stored my wet weather gear away a week before as we approached the equator.

11/ Make sure safety gear is easily accessible, but at the same time not vulnerable. So if your life-rings, lifering lights and Jonbouy are on the pushpit make sure they are secured really well, but easy to release. If your EPIRB is in the companionway make sure it isn’t vulnerable to rope tails, and your grab bag is secured.

12/ Always make sure that you have sufficient rope bags for rope tails, as inevitably they will end up overboard or get sucked out through a cockpit drain. Sometimes it is necessary to use the engine to help you to turn up into the wind as a gale builds to enable you to reef or lower the mainsail and this is not the time to get a rope around the prop’!

13/ Don’t let any one person stay on the helm, or on watch for too long as getting too tired is an excellent way of making a bad decision or judgement. I’ve met many hero’s over the years who think it’s smart to stay on the helm or on watch for a ridiculous number of hours and I know from my own experience approaching the coast of Turkey in a Gale and not taking my own advice I became disorientated. It simply isn’t smart and puts everyone on board and the boat in danger

14/ Emergency steering. The only method of emergency steering that I’ve heard of that actually works is the use of a drogue or sea-brake with adjustable strops to each corner of the transom.

15/ In the event that things turn really bad and you have the sea room then the answer is a parachute anchor, however these can only be deployed safely if they have been set-up prior to your departure. A proper parachute anchor is very large (about 8 metres diameter) and will allow you to lie bow-on into a storm with the minimum amount of drift.

16/ Aim to be as self-sufficient as possible as many cruising areas, particularly across the Pacific and Indian oceans don’t have yachting facilities.

17/ Be aware that motoring in heavy seas often results in air locks, so if the tank isn’t full and it is off centre be aware of that fact. You may find the engine cutting out while still having a quarter of a tank or more of fuel.

18/ If possible have your fuel tankage increased prior to extended cruising. Carrying umpteen jerry cans of diesel along the side decks is right in the path of a breaking green wave, and apart from anything else having this weight up high reduces your yachts stability.

19/ Safety gear in the cockpit, such as life-rings, MOB devices and Dan-Bouys should preferable be stowed and secured out of the path of a wave breaking across the cockpit. I realise that it is common practice to secure these items on the pushpit, but it only takes one breaking wave to potentially take the lot away.

There are a number of techniques to master.

1/ Poling out a head sail using a lazy sheet so that the headsail can be furled while holding the pole in place.

2/ Reefing while on the wind. Head out into a sea and practice reefing so that it can be done quickly and easily. Mainsail reefing can still be done while sailing upwind under headsail by easing the mainsheet until the main back-winds.

3/ Outboard sheet positioned fore & aft for your headsail furled as much as possible. When reefing a furling headsail, make sure to move the sheet block forward in order to maintain the correct angle between sheet and sail

4/ Check reef lines and practice setting reefs before you really have to and where possible mark the halyard positions for your reef points to make it quicker to take in reefs.

5/ Don’t leave it until you need it to try using your trysail for the first time if you have one. In a bad sea-way it can be much safer to sail upwind and you will only be able to do this in a storm with a trysail. So practice setting it and know where the sheet lead position is. Better still simply have a very deep 3rd reef in your mainsail and minimise the need to ever use a trysail.

6/ A snatch block is a very useful thing to have for multiple uses, whether it is outboard sheeting a headsail, a turning block for a trysail, or leading the snuffer line to collapse your cruising spinnaker when it becomes overpowered. Of course you will only be able to use one if you have a toe-rail that allows you to secure a snatch-block to, or strong points along the deck such as those fitted for the spinnaker sheet turning blocks and brace positions.

7/ Although not normally found on cruising yachts a simple piston bilge-pump and a stout bucket are incredible useful when water does get down below from any source. It could be as simple as water from your wet weather gear coming down the companionway. When you are on the same tack and heeled for days on end the normal bilge pick up won’t work, hence having a piston bilge pump can be very useful.

Alternatively a manual bilge pump mounted below with a long inlet hose is another alternative.

Cruising is a terrific adventure and with sensible preparation there is no reason to ever be put in danger. However, you can’t hope to cover every eventuality, so be practical about the spares you carry and if I had one piece of advice I would say ‘keep it simple’.

PBS Director Lee Condell has spent a life-time sailing, both cruising and racing, including a 26,000 voyage on his own yacht 2-handed from Sydney to Ireland which took in 18 Countries.

Note: The photo is of PBS client Dirk Muller a few months ago, taken mid-Atlantic on his Sydney delivered Sun Odyssey 439 “Esprit III” and taken by partner and co-owner/skipper Annie Schady. They are 2 years into a circumnavigation.