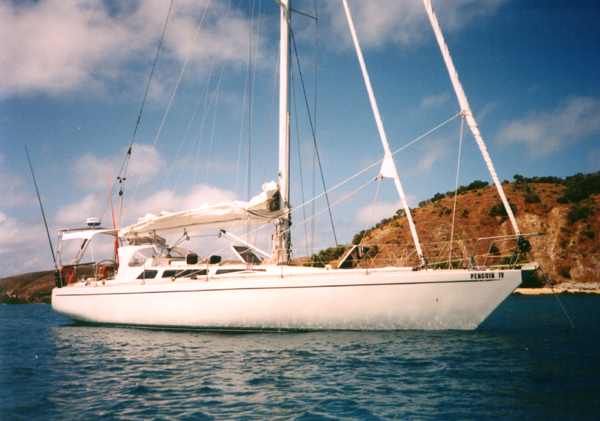 Having cruised 25,000 from Australia to Northern Europe the most important piece of advice I can offer those considering what yachts are best suited to these sorts of voyages is to find a yacht that sails well with enough sailing power to cruise fully loaded in the average 15 knots of trade winds. The number of sailing yachts that I encountered that spent the vast majority of their time motoring was astounding and the reason was that the majority of people found a ‘sturdy’ yacht that they thought would withstand the most adverse weather they were likely to experience. Of course your yacht needs to be able to withstand the most severe weather; however this should not be the only priority! There can be nothing more frustrating than motoring on a yacht 75% of the time as many of the yachts I met did. In comparison I sailed 75% of the time, and that included crossing the equatorial zone where there is little wind for quite some distance. I can’t tell you the number of yachts that I met that had sailed from Europe across the Atlantic, through Panama and then across the Pacific & Indian oceans and had never experienced any more than a rain squall with no more than 30 knots of wind! So experiencing a gale or storm is not the norm’.

So what is the answer? A cruising yacht needs to be well built, well maintained and equipped appropriately for the voyage it is intended to complete. However the sail plan should allow for enough power to sail in the conditions that you’re likely to encounter most of the time. This can be achieved in a combination of ways. On my particular yacht I had a large furling genoa and a spinnaker in a sock, but also had a provision for an inner forestay with a staysail for higher wind conditions, and a storm jib and trysail should they have been needed, but thankfully they were never required. With modern sail plans cruising asymmetric spinnakers could be the answer, or the latest trend are furling code 0’s sails which look like the combination of an asymmetric spinnaker and a furling genneker and can be flown in front of the forestay on a simple single-line furler.

So when considering a blue water cruising yacht allow for the fact that you will undoubtedly be carrying full water and fuel, back-up fuel + all of the provisions required for a lengthy time on board and this must be allowed for when considering how the yacht will sail in typical trade winds. Yes, you need to have a set-up for adverse weather, but it is also important to have enough sail area to actual sail fully loaded in the typical conditions you will have for 95% of a bluewater cruise.

Lee Condell is co-director of Performance Boating and cruised his own 44 foot yacht two-handed from Sydney to Ireland via theRed Sea in a 10 month voyage covering 17 Countries and 26,000 nautical miles.