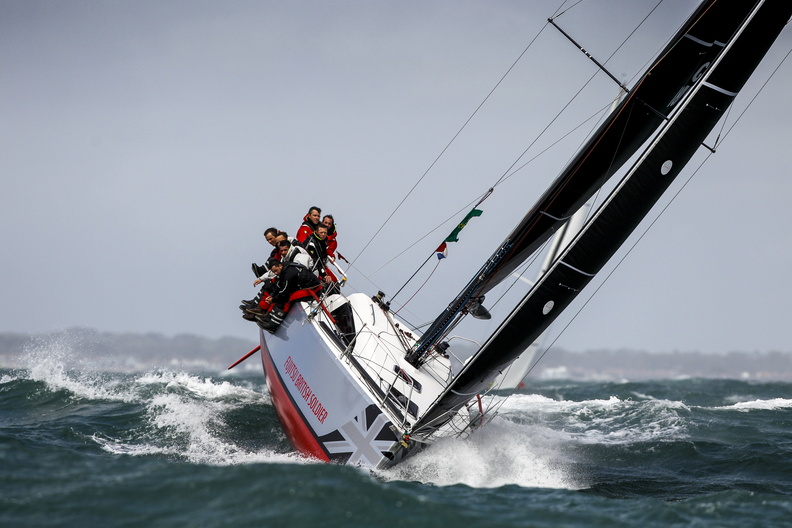 What a race the Rolex Fastnet Race turned out to be! This 49th edition was also the very first to finish in Cherbourg, France which of course posed additional challenges for the 337 participants, and the 59 racing in IRC 2-handed.

If you haven’t raced in those waters its hard to appreciate just how challenging it is with huge tide races, one of the busiest shipping channels in the world, and exclusion zones to navigate around. To boot, this year the fleet started with winds exceeding 30 knots for the first 18 hours. The smaller boats also started later therefore missing the tidal gate, so had tide-against-wind exiting the Solent in bone jarring conditions. The new finish means dealing with the Aldernay tidal race on the approach to the finish, which is shown on the charts to have been recorded at over 10 knots with King tides!

There were many Jeanneau’s to follow with twenty all up in the fleet. Some of the Corinthian entries in particular were very enjoyable to keep an eye on. I’m thinking especially of Sun Fast 3300 “Chilli Pepper” a father and daughter team Ellie and Jim Driver, with Ellie posting regular updates on their progress, the British Army Team on the Sun Fast 3600 “Fujitsu British Soldier”, and Irish Sailing Academy Sun Fast 37 “Desert Star” which sailed incredibly well. 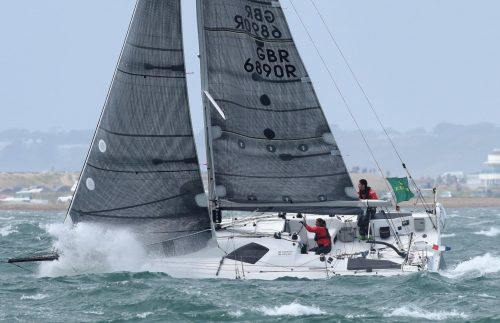 An early retirement within the first day was one of the favourites, the Sun Fast 3300 “Gentoo”. Dee Caffari and James Harada had little choice but to pull out when their mainsail separated on a seam.

However, despite much of the race perhaps not suiting the 3300’s “Swell”, with Henry Bomby and Shirley Robinson, was highly competitive after the first day. Their race got off to a shaky start when they were OCS, a tough way to start in such a highly competitive fleet. Then by their own admission they stuffed up off Portland Bill going the wrong way and losing five miles to the leaders, but after that they never gave up and fought the whole way.

Bomby and Robinson’s boat is configured with the carbon mast and boom, water-ballast and large A sails, so heavy air reaching and running would have really seen them shine… but there was very little of that and on the one occasion where they were in good pressure off the wind they really flew and made big gains. So, carrying a high handicap against the extremely competitive “Leon” was always going to be a tough ask.

“Swell” did manage to finally get pass “Leon” reaching, but when it came to getting downwind in the lighter conditions towards the finish they struggled to make any further gains finishing just thirteen minutes ahead of them. “Leon” was then in turn four minutes ahead of the bigger “Aileau”, which was the next boat home after four and a half days of racing. A brilliant result and they obviously gave it everything as they were reported to be exhausted at the finish. Shirley was quoted as saying that it felt like they had done a much longer race!

Other standout results in the 2-handed division were three Sun Fast 3200’s with “Mzungu” finishing 4th, not far behind “Cora” was in 6th, and “Enedis” in 9th. The next 3300’s were “New Normal” in 13th, followed by our South Coast UK Jeanneau dealer Nigel Colley on “Fastrak XII” in 15th, the aforementioned “Chilli Pepper” in 16th, and Sun Fast 3600 “Diablo” in 19th.

Showing how competitive the 2-handed division was “Swell” also took out 2nd overall in IRC3, while the fully crewed “Fujitsu British Soldier” was 6th and “New Normal” 9th.

In IRC4 the standout was the 20 year-old Sun Fast 37 “Desert Star” finishing a phenomenal 2nd, and was in fact the highest placed Jeanneau in the entire IRC fleet finishing a remarkable 13th overall among much bigger boats. The Sun Fast 3200’s “Mzungu” and “Cora” finished 7th and 9th respectively in this division.

With ten Jeanneau Sun Fast 3300’s having arrived to Australia in the last year, and two new arrival Sun Fast 3600’s, there are a bundle of sailors itching for offshore racing to resume post Covid. Performance Boating Sales has two stock Sun Fast 3300’s on order for availability to Sydney at the end of the year, and there are two remaining Sun Fast 3600’s with free Carbon masts available for early November handover here.