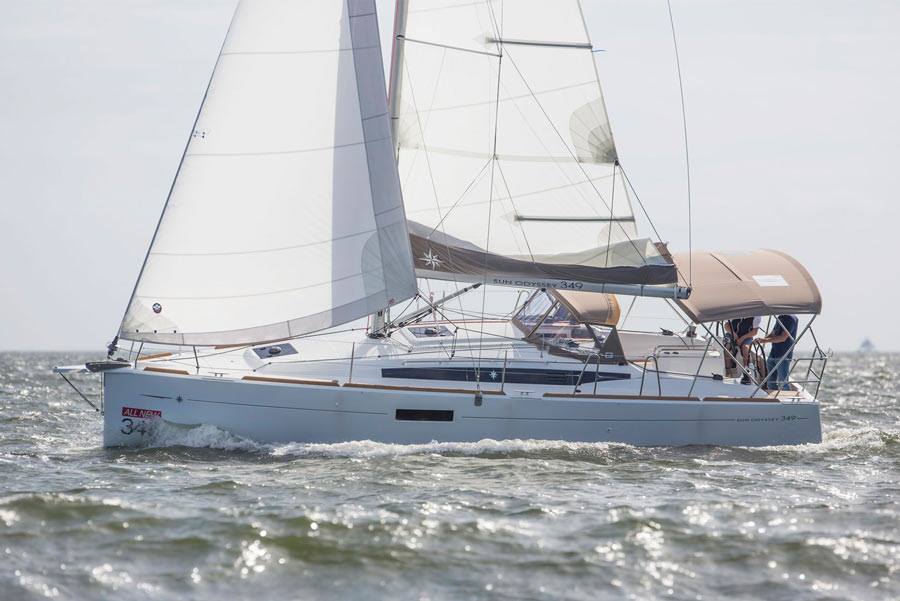 There’s a lot more to the modern chined hull’s used by Jeanneau than may be obvious, whether designed by Philippe Briand, Marc Lombard or Daniel Andrieu. This hull design is combined with other factors like the position of the mast and keel to provide an overall package that is balanced and forgiving.

Chined hulls extend the waterline beam so that when the yacht heels it effectively heels at a wider point from the centreline, effectively maximising form stability. The chine itself offers an increase in buoyancy at the point of heel when it becomes immersed, so it takes considerably more power to heel the yacht further. The line of the chine at the same time adds directional stability making the yacht want to sail in a straight line. So where a yacht normally loads up the rudder when it becomes well-heeled and tries to round up, a well-designed chined hull does exactly the opposite. Chined hulls and the wider transoms associated with them are also complimented by twin rudders that increase control when the yacht is powered up by being fully immersed and angled to allow for heel. The benefit is a yacht that is incredibly forgiving and will allow you to get away with being hit by a strong gust of wind, or becoming overpowered without having to reduce sail in a hurry. The advantages when cruising short-handed, sailing with an inexperienced crew or racing are enormous.

Another significant benefit of these modern hulls that also carry their beam further aft is an enormous increase in the cabin space aft and cockpit, so todays yachts that have been designed on new hulls typically exhibit the space and volume of a yacht two foot larger from only a few years ago.