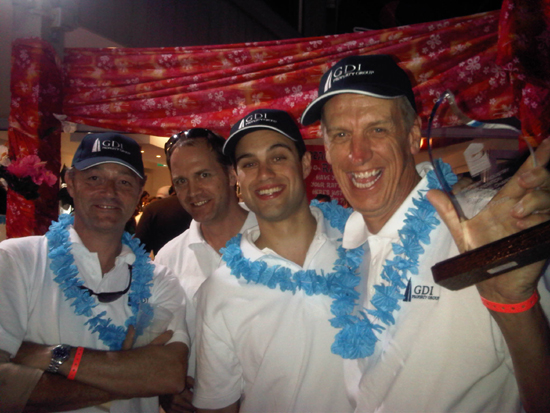 The award winning Sun Odyssey 409 has won its first race since arriving in Australia.

Racing in division four of the recent Property Industry Foundation Charity Regatta hosted by Middle Harbour Yacht Club in Sydney, the Jeanneau Sun Odyssey 409 Mirage was first across the finish line in a race that saw an average of 6-8 knots across the deck. Coming in second was a Bavaria 41, That Boat with a Bavaria 38, Jai Dee finishing off the top three. Nearly 3.5 minutes separated first and second placed boats with over 9 minutes between first and third. An interesting note was that the only yachts with a faster elapsed time than Mirage were a Sydney 36 Sport Stormway, and another Sydney 36, Alpha Carinae.

Ron Jacobs was on board Mirage for her first race and was very impressed by the SO409. “It was quite light winds for the regatta though we did see some nice gusts. The yacht performed really well & showed nice acceleration.”

Two of the four owners of Mirage were on board for the regatta as well as Toby from Evolution sails. The other four in the crew where from the office of the sponsor of the day, GDI Property Group.

An excellent result for the all new Jeanneau Sun Odyssey 409 in its first race outing.

For more information on the amazing Jeanneau Sun Odyssey 409, contact us now.