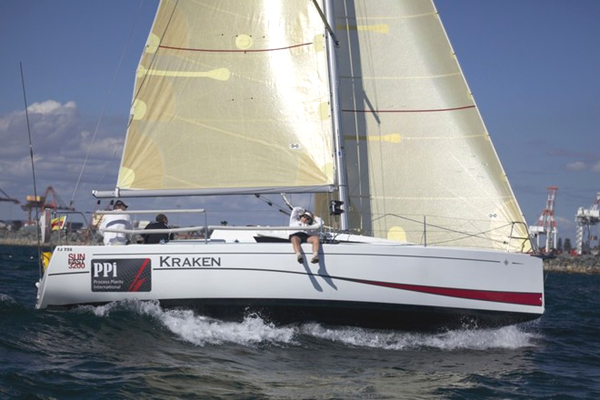 A third place in Saturday night’s Westcoaster Ocean Race was just sufficient for Todd Giraudo’s Hillarys-based Kraken to win IRC Division Two of this season’s Evolution Sails Blue Water Series.
“Kraken” finished the race one place behind her nearest rival, Anthony Kirke’s Archambault 35 “Archimedes”, resulting in a series tie that was resolved in Kraken’s favour on a count-back. Ian Holder’s Whiting 32 Bad Habits disappointing fourth in the race gave her third place in the series, two points behind Kraken and Archimedes. Holder, however, will be satisfied with his season, having secured his second successive Archambault Trophy two weeks ago with an overall third in the 235 nautical mile 50th Cape Naturaliste Race.

Back in France the first major regatta of the season “Spi Ouest” recently took place and yet again the Sun Fast 3200’s featured in their class with the best a 3rd overall, behind a Sun Odyssey 40!