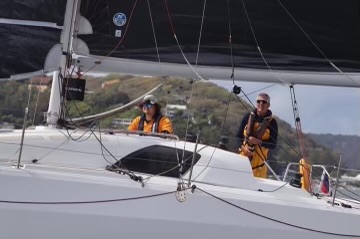 With a little trepidation my son John and I prepared for our first dual handed race weekend especially with a 20-25 knot SE with 2-3 metre seas. Although I had delivered our Sunfast 3300, now called Transcendence, back to Pittwater from Melbourne in November this was our first offshore race of roughly 50nm each way.

On the Saturday preparation took longer than expected and the fleet had already departed before we got to the start line at the end of Pittwater. On the first leg to Third Point there was a large bang and our vang saddle jumped over the side when the rivets gave way. I spent an uncomfortable 30 minutes trying to remember how to do a Rolling Hitch and rigged a replacement. It was a was a reach all the way we never saw the apparent wind more than 100 degrees. With a full main and J2 and 200 litres of water ballast we were well powered up. It was bouncy but the boat behaved well and our scow bow kept above the backs of the waves. We caught up and past a few of the slower boats. I heard that Marc’s Dupret’s foiling Figaro 3 Intiy was amazing as it disappeared over the horizon at the front of the fleet. Our highest speed was over 17 knots on one wave, but we had a few times we got her wound up over 14 kts over a couple of waves and kept this up for up to a minute.

We arrived at Newcastle around 5 hours after starting, gybed into the harbour and up to the finish line. We were quite surprised to hear we had done so well on IRC and ORC when we met the other crews in the club. A few drinks a quick dinner and an early night were in order.

On Sunday for the return we woke early, had a good breakfast ashore and I did a more substantial ‘hack’ for the vang. We decided to keep the full main and J2 for the start of the return as the forecast was for 20kts SE going SSE during the day. The start was delayed by a ship leaving. We got a good start and headed out of the harbour and headed up on the wind for the ‘bash’ back. We ended up having an enjoyable close race side by side with Intiy close hauled for a couple of hours until the wind picked up to 25kts and we put in a reef.

The seas were quite confused and uncomfortable with some large waves breaking over the boat from time to time. We later found out that one of these waves had washed away our inflatable Dan Buoy. John and I were sharing the helming doing one hour on and one hour off.

The wind was quite variable in strength and direction, did not follow the forecast and backed at Soldiers Point allowing us to ease the sheets and Intiy to get the foils working and pull well ahead of us. Bearing further away at Third Point we managed to do a bit of surfing to the finish at the entrance to Pittwater. It was 7 hours back and going into the smooth waters of Pittwater was a delight after being bashed around for so long.

Given the conditions we had not felt like eating during the race so a big thanks to the club staff had kept the bar and kitchen open for us and we had a drink and meal with Anna and John’s partner Gemma, who had kindly caught the lines and helped us pack up. We were again surprised to have done well on IRC and ORC and headed for another early night and a chance to let the young and old bodies recover.