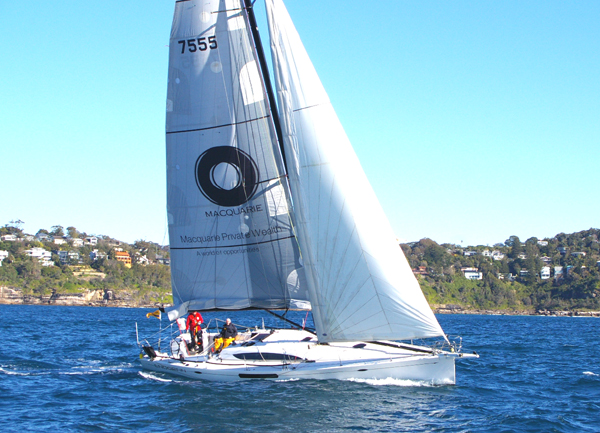 With a forecast for good breeze for the Saturday race North, and ‘fresh’ for the return race on Sunday the Performance Boating Sales sponsored Pittwater and return races were always going to be rewarding and that certainly was the case. Doug Cuming’s Egan 9.5m trimaran “Voodoo Spirit” was in flying form and deserved to win the series with impressive performances both ways completely dominating by winning both races and under both handicap systems. An hour 53 up and an hour 36 back is very impressive going! The race up was a faster yacht event with the other multi the Grainger MTB920 “Big Bird” taking out second place followed by the first monohull Peter Mooney’s Sydney 47CR “Endorfin”.
After a very pleasant evening moored at The Basin the fleet awoke to a beautiful calm morning, but the forecast was spot-on as the breeze kicked in with a vengeance with 20 minutes to go to the start of the return race and as soon as we got into the mouth of the Hawkesbury there were whitecaps everywhere and a solid 25 knots plus. “Voodoo” shot out into the lead while “Big Bird” turned back to reduce sail, so the first mono out into open water was Peter McCorquodale’s Adam’s 10 “Torquil”. As the fleet cleared Bangally Head the pressure built and yacht’s continued to reduce sail. “Endorfin” was well prepared with two reef’s already set and took the monohull lead followed by Lee Condell on the Sydney 36CR “Gailforce” which overtook “Torquil” as they reduced sail. With gusts of up to 35 knots but near flat water is was a comfortable and quick ride back down to the harbour and the finishing order was “Voodoo”, “Endorfin” and then “Big Bird” with Steve Watson’s Northshore 38 “Moya” close enough to secure 3rd on handicap.