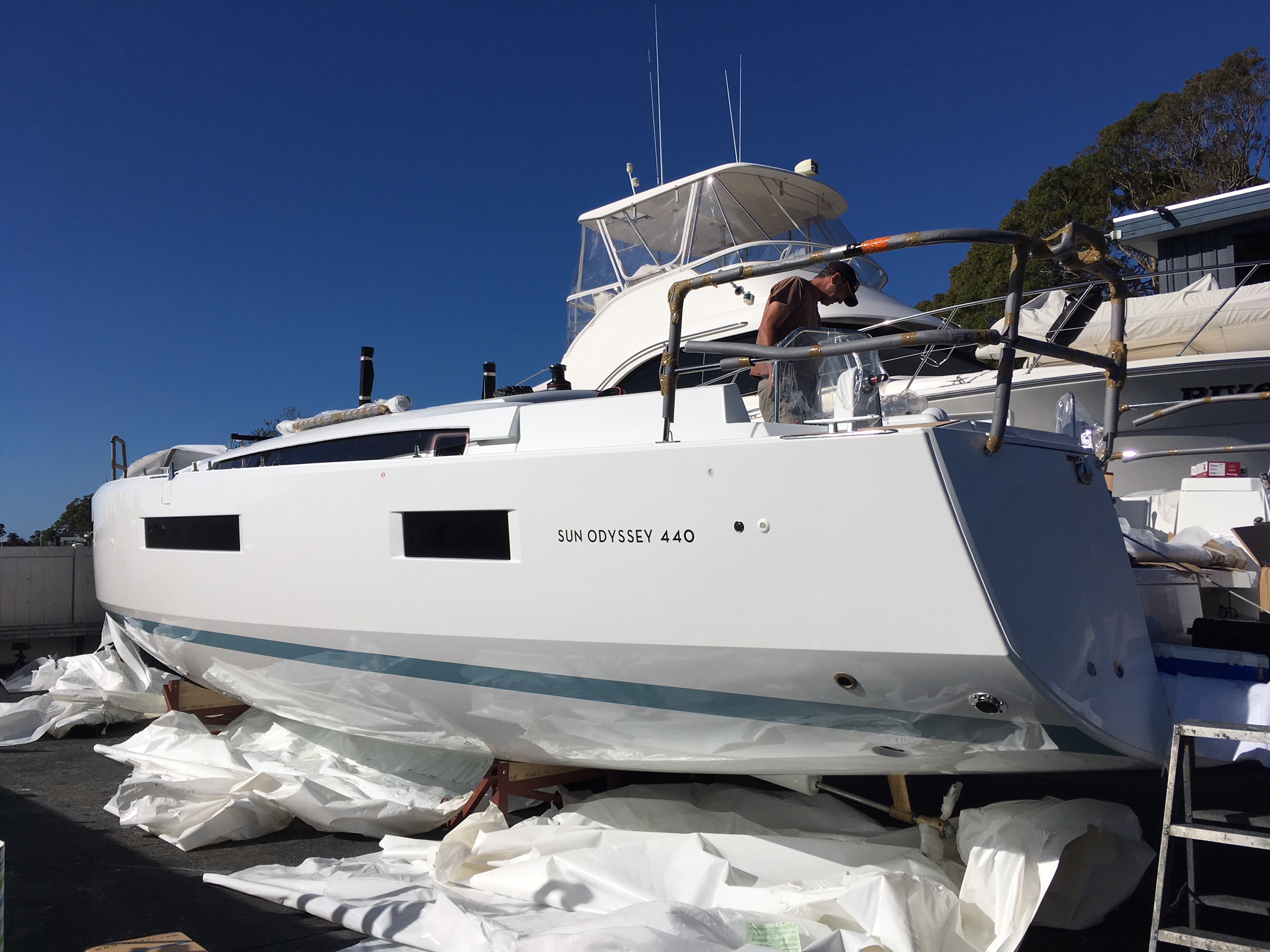 Just arrived is the very first example of the multi award winning Jeanneau Sun Odyssey 440, and it’s everything we expected and more! European Yacht of the Year 2018, Sails magazine Best Boat 2018, and Cruising World Yacht of the Year 2018. With four sold sight unseen and prior to the above awards there is eager anticipation about this new design, but why?

Well, the most important aspect about the new Sun Odyssey 440 is not just that it is the first of the next generation of the Sun Odyssey range, but that it is the first of a whole new generation of production cruising yachts, breaking ground in several areas. The key element of many of the design features in this design is a different hull form with much more volume forward. This is not new in offshore racing yachts, but it is a first for a major production builder, and with that increased volume Jeanneau have broken new ground. Down below the feeling of space, especially in the forward owners cabin is exceptional, with the most obvious feature the perfectly rectangular bed! In addition the galley is expansive and secure at sea being a wrap-around, while the forward facing nav’ station has a proper sized table, and both heads have separate shower stalls.

The most obvious exterior feature is the sloping side decks which allow ease of movement from the deck into the cockpit, which then allows much higher coamings for the cockpit seats, which both makes the seating more comfortable, but also more protected. The volume aft allows for an asymmetric cockpit with u-shaped seating to starboard. This is then used to offer comfortable outdoor dining, while still being able to move around the cockpit. Another novel feature is the option to have the coaming fold out into a sun-bed, though because the foredeck is so expansive and we tend to want shade in the cockpit area this particular innovation is not appealing to the early buyers here in Australia.

For those that wish to maintain the power of a conventional mainsail the gooseneck has been significantly lowered, so that in combination with the off-set boom-bag zip it is a much easier process to pack away a conventional main.

As with the previous generation Sun Odyssey range the yacht is offered with either a short overlap headsail, or self-tacking jib, and can be specified with a fixed bow-sprit for carrying a Code 0 or asymmetric spinnaker, or for those who would prefer to minimise their overall length to reduce marina charges the twin-roller with code 0 strong point can be offered.

The Sun Odyssey 440 will have its Australian Premiere at the Pittwater Sail Expo, which is on April the 28th and 29th at the Royal Prince Alfred Yacht Club. It will also be taking part in the Commodore’s Cup at Sail Port Stephens from April 9th to 11th.