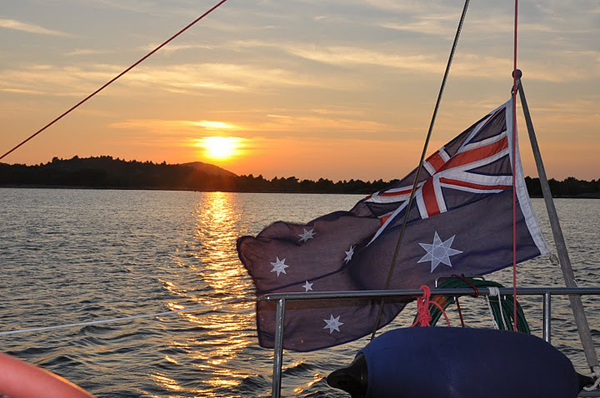 Yacht cruising long distance need not be daunting. I should know as I left Sydney with quite a lot of sailing experience, but virtually no cruising experience and ended up on the other side of the World 12 months later!

So what holds us back? The fear of the unknown is the simple answer, but bluewater cruising is easy with the right preparation. There are an astonishing number of people cruising around the World with a serious lack of knowledge and that’s fine when everything is going well, but when a difficulty arises then it is a very different story. You need to develop the appropriate skills with clear MOB and Emergency procedures, and it goes without saying that the yacht needs to be well prepared in terms of the rig, sails, engine, electrics and instruments. There are numerous publications, on-line forums and guides to make passage planning relatively easy these days, so this element is certainly a lot easier than it used to be.

In terms of all items related to your yacht you can be sure that it will be considerably easier and probably cheaper to do preventative maintenance before you leave than to have to deal with breakages and failures in the middle of nowhere. So my advice is to pay a professional to thoroughly check the rig on your yacht as a rig failure can be highly dangerous and apart from anything else an expensive inconvenience if it goes over the side! When things really turn for the worse a reliable engine may well be called on, so don’t make the mistake that several yachts that I met made by hoping the engine on their yacht would last their voyage knowing that from day 1 it wasn’t 100%. And guess what. At the most inconvenient time they failed and it became a horrendously expensive and long-winded process to have new engines fitted.

You should be confident that the electrical system is up to the job and 100% reliable and if in doubt use the KISS principal. The less complex the system and your yacht in general the easier it will be to maintain. It goes without saying that your yacht should be 100% watertight, but if there are any signs of any deck fittings leaking attend to it before you set off as you don’t want to damage any wiring or components the first time you encounter foul weather. Fortunately the cost of good batteries, solar charging, plotters etc. have come down dramatically, so it’s possible to update and equip any yacht without it becoming prohibitively expensive. And by the way, you can have all the latest gadgetry, but at the end of the day it is your obligation to keep a good lookout at all times, and you must have a full set of paper charts, expensive as this can become, as you cannot and should not simply rely on electronic ones.

From a safety point of view make sure that all of your emergency safety gear is easily accessible from the companionway area and does not share a locker that is used for other gear where it can become buried. I strongly advise having an emergency grab bag with emergency rations, flares, torch and other emergency gear close to the companionway, as well as several LED torches and they should be secure and easy to reach on a pitch dark night. Develop an emergency procedure and discuss it at length with your crew and most importantly if you have a crew change or have guests of friends join you for a passage make sure to go through it with them when they join you.

Before you depart develop a ‘Man Overboard’ procedure and practice it. And don’t simply throw a life-ring overboard, if at all possible find a volunteer and actually experience how difficult it is to get a human onboard. So make sure you have the equipment and a system that works for your particularly yacht as its too important not to.

As to the passage sailing itself this is the easy bit. Fortunately most of the main cruising routes are relatively straight-forward and tidal free, so navigation is no more difficult than a short trip up or down the NSW coast. We experience our fair share of violent weather here on the East coast, but in the central latitudes on the cruising routes by and large this is unlikely and there is a fund of information available so that you can plan your voyage to avoid the worst times in each region. Develop a watch system that suits you and your crew, there is no set system, so do what works for you. I found that there was always a bit of nervousness before heading off on a passage of several days or more, but after the first 24 hours a routine develops and there is a real pleasure in being there out on the ocean taking in the sky and changes in the ocean and the hours just seem to glide by. The other thing that you will discover is that within no time you will meet other cruising sailors and join a radio sched’ that will be a huge source of information.

It should be obvious that the newer the yacht the less will need to be spent on maintenance, so this should be taken into consideration when looking for the right vessel, but that’s not to say an older yacht that has been well maintained isn’t perfectly acceptable.

So my advice is not to fear the unknown, embrace it and you won’t regret it. As the saying goes “You only live once”. Bluewater cruising is an amazing way to see the World, meet great people, challenge yourselves and simply have a fantastic time.

Lee Condell is a director of Performance Boating and cruised his own 44 foot yacht two-handed from Sydney to Ireland via the Red Sea in a 10 month voyage covering 17 Countries and 26,000 nautical miles.