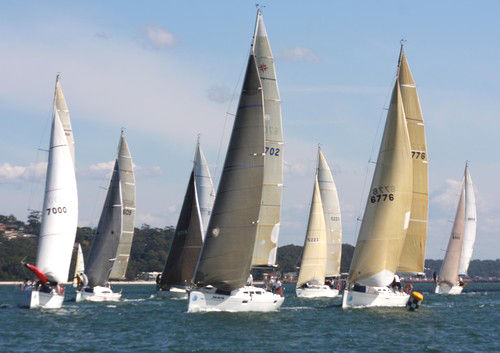 The week from the 11th to the 17th of April saw Joie de Vie, our Jeanneau 42i, compete in Sail Port Stephens for a 3rd year in a row. The regatta provides a great event for some great sailing, good camaraderie at a wonderful destination. This year saw a fleet of around 100 boats compete in events ranging from the Commodore’s Cup (Monday through to Wednesday) and the main regatta held on Friday through to

Sunday – quite a fleet!

This was the first year that “Joie de Vie” had competed in the Commodore’s Cup  with “Good Form” only other Alfred’s boat.  Unfortunately I couldn’t organise to get away from work so I asked my delivery crew Wayne “Banga” Banks-Smith – one of Hobart’s top steerers and owner of the Farr 40 War Games and one of my Sydney 38 crew, Sarah Dunne to sail the boat.

Joie de Vie in the true cruising spirit of the Commodore’s Cup had the anchor and chain in the bow, the dodger and bimini, BBQ, fuel and water and the Dacron cruising sails along with a sail locker full of racing sails being kept for the main event.

A highlight of the series was the inclusion of the Jeanneau Cup.  Performance Boating Services put on an excellent cocktail party at Mavericks with great food on Monday for all the Jeanneau skippers and crew and also had drinks each evening after racing on the dock.  This meant everyone got to know each other.

Joie de Vie was very happy with the results, 4th Overall in the CC and 1st in the Jeanneau fleet (thanks to the gracious withdrawal of the best scoring boat, skipper by the sponsor, Ron Jacobs in the new Jeanneau 409. Presentations involved a fun night of dinner and dancing at the Shoal Bay Resort on the Wednesday evening – hopefully next year, work won’t get in the way of what my crew tell be was a great 3 days.

For Joie de Vie it was a great week of sailing with a mixture of estuary and offshore sailing around the islands.  Its a very beautiful place to sail and is made very interesting by the sandbars and currents, reminiscent of sailing at Airlie and Hammo race weeks. The casual approach to après sailing topped this off as “must do” event on your sailing calendar.

Thanks to all Joie de Vie’s crew made up of an all Alfred’s crew including Frank Walker, Bob Stoddard, Anna Cross, Rod Ward, John Lane Smith, Mark Jobbins, Sarah Dunne and my sons Ben and Tim.