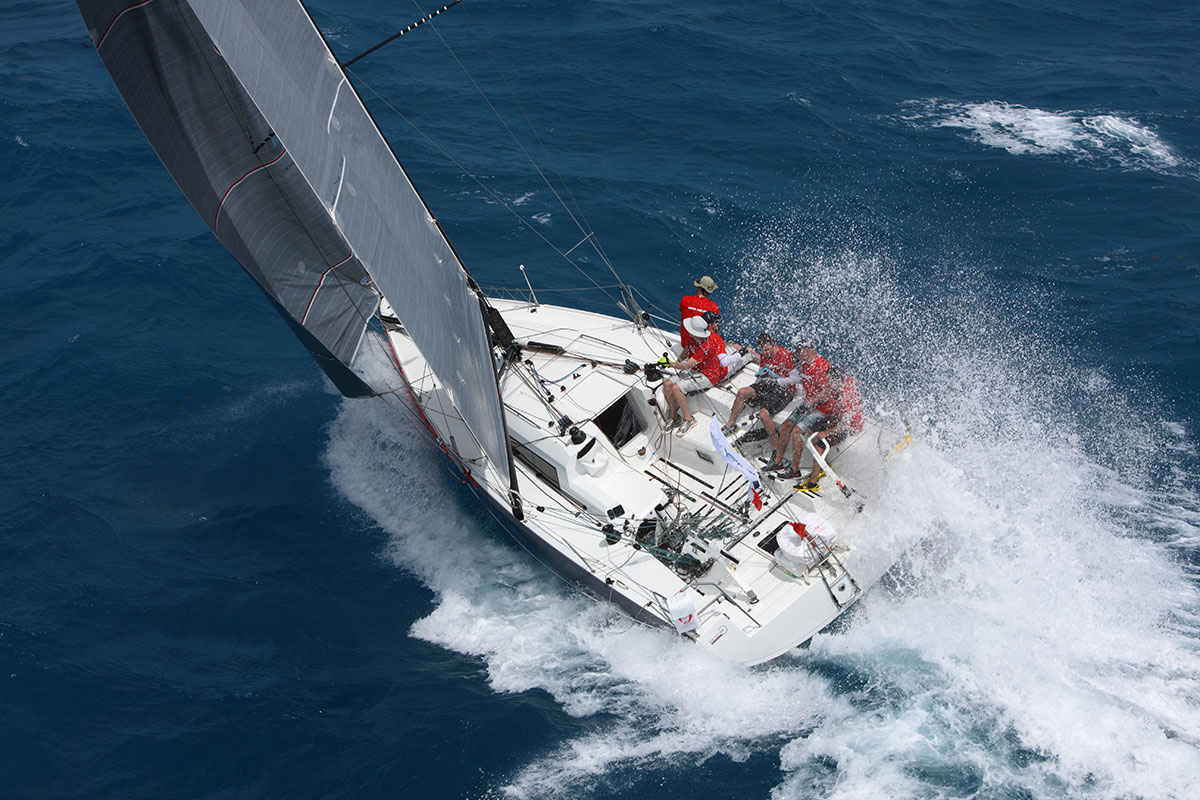 Redshift, a Jeanneau Sun Fast 3600, has taken out first place in IRC Division Three of the Caribbean 600! (photo Tim Wright)

Chartered by Ed Fishwick and skippered by Nick Cherry, Redshift, had an elapsed time of 3 – 14:35:45 which gave a few her crew a few ‘moments’ before taking first place with just 25minutes to second place under corrected time.

The Sun Fast is growing in popularity all over the world showing that she is a yacht for all types of racing, fully crewed or short handed. Kraken, the first Sun Fast 3600 into Australia, is now racing short handed in Western Australia after successfully racing in the 2014 Rolex Sydney to Hobart Yacht Race.

IRC Three produced the closest contest of any class with four yachts taking the lead at various stages of the race. By Thursday night, the wind had picked up to 20 knots, gusting 30. The beat to the finish from Redonda was exceptionally hard with the crews having to grunt up for the final push to the finish line. Yuri Fadeev’s Russian crew on the First 40.7, Intuition was leading the fleet on the water at Redonda but lost a sail over the side which cost them an hour to retrieve in the rough seas. Louis-Marie Dussere’s JPK 10.10, Raging Bee was sailing Two Handed and finished third in class. After the race, the highly experienced French skipper exclaimed. The standard of the competition and conditions were more difficult than any Fastnet. Peter Scholfield’s HOD 35, Zarafa crewed by young servicemen from the King’s Royal Hussars and Queen’s Royal Lancers were very much in contention, but it was Ed Fishwick’s Sunfast 36, Redshift that pulled away in the wind shadow of Guadeloupe to take the class title.

“We are delighted to have won in such a competitive class against boats like Zarafa and Raging Bee. We were pushing each other along and it was great competition. The highlight of the race for us was the reach back from Desirade, screaming along under the A3, that was amazing. I’ve done this race twice before but none of the others onboard had. We’re all really good mates but hadn’t raced together like this before so we had a great time and a lot of laughs onboard. The race is pretty special – it’s a great place and the course was designed for sailors, pushing the boats and crews. We’ll definitely be back again.”

“Since 2009, the RORC Caribbean 600 has been growing in popularity and the seventh edition boasts an astounding fleet of yachts: record breaking high performance racers, magnificent schooners, elegant classics and fast production yachts. World class sailors will be taking part, rubbing shoulders with royalty, captains of industry and passionate Corinthian amateurs.

The course meanders through the stunning central Caribbean affording amazing scenery, but the RORC Caribbean 600 is not just a joyride. Competitors can expect little sleep as the myriad of corners create many manoeuvres. The racing is electric but the high speed action in tropical heat can be exhausting. At the finish, the welcome party for the crews has become legendary. Every boat is cheered in, regardless of the hour, for a cold beer and a warm welcome.”