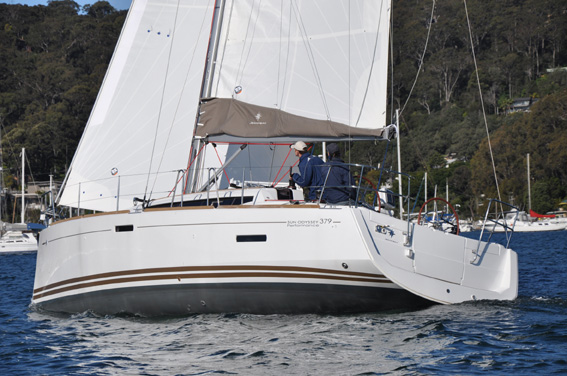 Dodging threatening rain squalls in the westernSolentduring November might not sound too appealing, but provided the ideal conditions to experience how the new Sun Odyssey 379 performed in real life conditions, well away from the bright lights of a boat show.

performance. Their knowledge and attention to detail was really apparent with the clever and stylish cockpit ergonomics and how the

sail handling controls are fully optimised for short-handed or even single handed sailing. Significantly our trial boat had just been sold

to a couple who are leaving the dark side of power-boating and wanted a sailboat that would perform well but remain easy to handle.

I am sure that they will not be disappointed.

Visually she initially looks very similar to the new Briand designed SO409 and SO439, but this smaller Sun Odyssey has been drawn

by Marc Lombard who has crafted a very versatile hull form available in three guises. In addition to the standard deep keel and rudder

configuration there is a shallow 1.5m draft variant sporting twin rudders plus an exciting lift keel version that will open up estuary

Sail options for the SO379 include; tracked self-tacking jib , code zero headsail, asymmetric or traditional spinnakers. The performance

The saildrive equipped 29hp Yanmar comfortably pushed the boat out of theLymingtonRiverwith no fuss, excess noise or vibration.

Very light but precise steering allied to the excellent visibility from either of the twin wheels also gave a great first impression.

The south-westerly breeze did not drop below 15 knots with regular gusts to around 20 knots, but protection from theIsle of Wightallowed

theWestern Solentto remain relatively smooth. The classic main was soon released from the stack-pack and easily hoisted and the

133% genoa unfurled, allowing the engine to be shut down (with the now standard Yanmar keyless switches)

The trial boat was the standard 1.95m draft, single rudder version and despite dragging the standard fixed three blade propeller ,

showing more that 7 knots.  The multifunction Simrad IS20 instruments providing the helmsman with a clear display of key information,

but I would have liked to have seen wind displays at both helm positions.

allows the helm to remain in full control of both the mainsheet and the genoa sheets at all times. As shown in the video below tacking the boat

singlehanded is simplicity itself, and despite the gusty conditions the SO379 tracked faultlessly, pointing up tightly and with only minimal

rudder and no tendency to round-up.Lombardseems to have made some real improvements in hull form, possibly helped by the hard chine’s

on the quarters, and I was left with the strong impression that this boat will comfortably carry full sail much longer than either of her SO36i

through a block at the masthead – leaving the stern clear of rigging wires.

Off the wind the 379 continued to impress and although time and conditions prevented hoisting an asymmetric, the boat looks like she will be

no exception to the renowned downwind performance of otherLombarddesigns, but personally changing that fixed blade to a feathering or

folding prop would be an early priority.

Both the cockpit and deck layout works really well even when well heeled, with effective non-slip and a good array of handholds. Despite

clutching a video camera (…so only one eye and one hand for the ship….)  I could move around with ease and safety as we put the boat

through numerous tacks and turns.

the central cockpit table. The helm can then not only control all the sails but avoids the need to make periodic journeys  to the below decks

chart-table. A real boon whether sailing single handed or if the cockpit is full of relaxing guests…

and although a bow-thruster might be a desirable extra, it would by no means be an essential must have.

see her becoming  a firm favourite for not only experienced sailors, but those taking up sailing for the first time or indeed converting from the

Jeanneau Owners Network is grateful to Tim Harley of Sea Ventures for his time and making the boat available for the review.