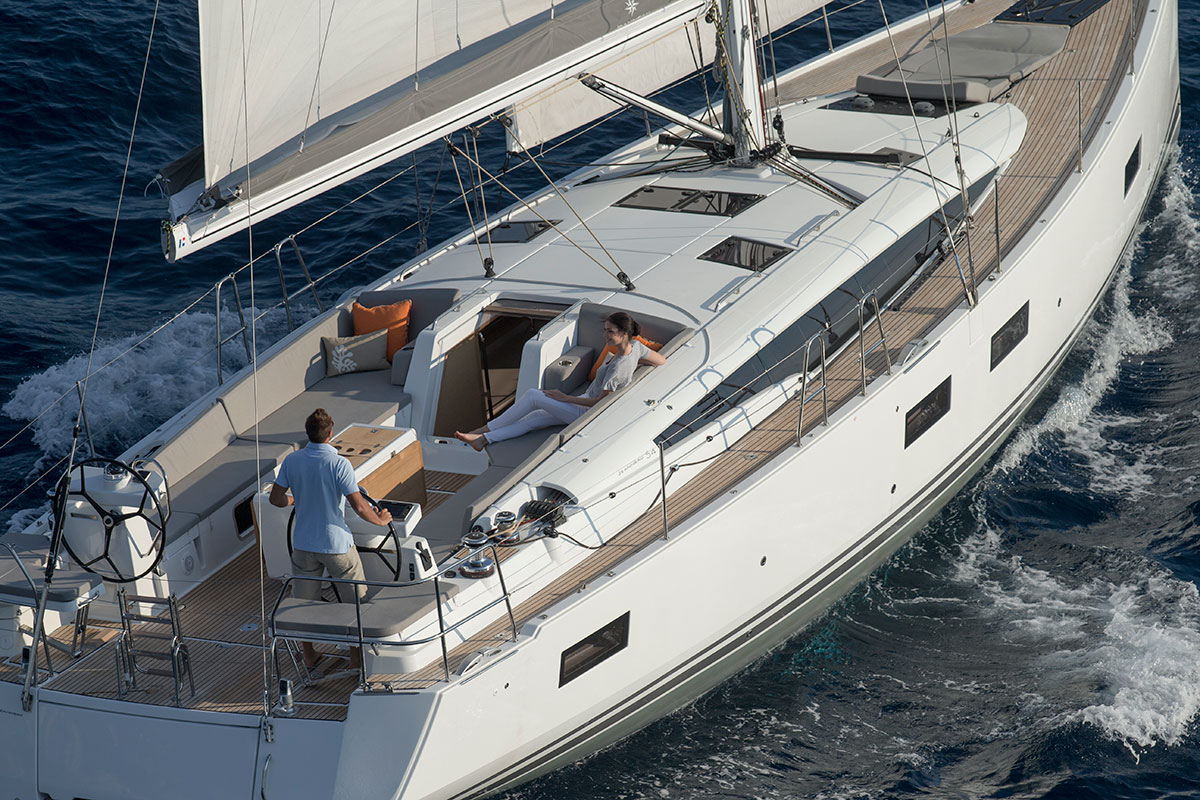 View the new Jeanneau 54 at the 2016 Sydney International Boatshow

The first thing you notice about the new Jeanneau 54 as you walk down the dock is just how large the boat is for a 54 footer. The transom with its wide fold-down swim platform is very broad and made broader yet by hard chines. The topsides are fairly high and slab sided without much flare or tumblehome. The side windows are rectangular and very modern looking. The sheer line is dead straight and angled slightly upward as it runs forward. And, the bow is nearly plumb so the sailing waterline, when the boat is heeled to 10 degrees or so, will be just about 54 feet.

The high topsides create a huge interior so the curved cabintop can have a very low profile that flows in one continuous line into the cockpit coaming. This streamlined appearance is enhanced by the long, narrow cabin windows that conform nicely to the curved line of the cabintop. 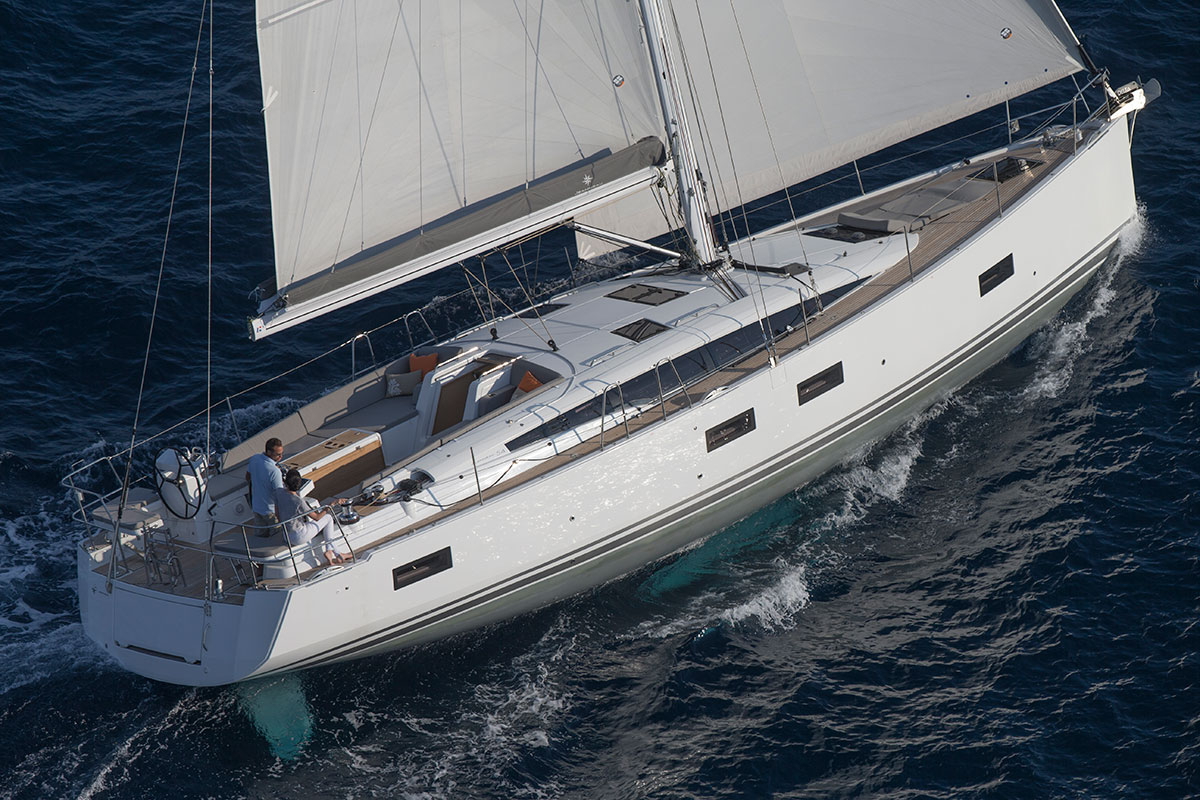 This thoroughly modern design was drawn by noted French naval architect Philippe Briand whose designs and style have led the way forward for the past three decades and more. Briand boats are known for their excellent sailing characteristics—easily driven, fast on all points of sail and comfortable in a seaway—and for their distinctive look.

As an expression of Euro-modern yacht design, the 54 promises to do many things very well and we were not disappointed by that promise when we got her away from the dock.

The morning BWS took the 54 out for a sail on the Chesapeake Bay was fair, warm and a fine 10-knot breeze was blowing from the south. So often we find only zephyrs on the bay so a bit of breeze was welcome.

The 54 handles easily around the docks. With the bow thruster engaged and the big folding prop inching us forward we peeled away from the floating dock and then slipped by other moored boats with only inches to spare. The twin Jaffa wheels and steering systems give you a firm and instant feel for the rudder and allow you to maneuver in tight spaces.

Once clear of the docks and mooring field we motored out the channel into the bay. The 75-hp. turbo charged Yanmar has plenty of torque to drive the 54 at her hull speed of 9.6 knots in flat water. At full revs, the engine was noticeable in the cockpit but not loud while down below, the sound insulation in the engine compartment kept the noise to a conversational level. At cruising revs of 2,200 rpms, the boat slipped along at seven and a half knots and the engine was virtually silent.

The 54 comes with an in-mast furling mainsail and a 100-percent self tacking jib that gives it 1,194 square feet of sail area and a sail area-to-displacement ratio of 16.5. As an option, you can have a classic slab reefing mainsail and add a 135 percent roller furling genoa that together increase the sail area to 1,323 square feet; this will enhance sailing performance both with more sail area and with better shaped sails.

The boat we were sailing on the bay had the in-mast furling main with the 135 percent genoa. Once clear of the channel, we rolled out the main and genoa and switched off the engine. The boat responded surprisingly quickly to the press of wind on the sails and felt like a true performance cruiser.

We hardened up to close hauled and trimmed the sails to see just how balanced she was. With about 15 knots of apparent wind the 54 sailed at 30 degrees and made a happy 7.7 knots. Plus, the helms were light and the whole boat in fine balance. We threw her through a few tacks to see how she handled and came away impressed with both the ease of tacking the big boat and her ability to tack in under 90 degrees true wind angle. With the 100 percent self tacking jib, we would probably be sailing five degrees closer to the wind but about a knot slower.

Once we fell off the wind to 60 degrees apparent, the 54 showed her true cruising colors. The apparent wind speed stayed right around 15 knots as the boat speed crept over eight and then settled in at about 8.3 knots. In fair weather and with a steady breeze and not much of a sea running, the 54 will be able to make 200-mile 24 hour runs under working canvas. With a reacher or other downwind sail, she should be able to cruise at close to nine knots.

The 54’s cockpit is huge. With us that day were the boat’s new owners and a couple of representatives from Jeanneau and the dealership. But this crowd did not get in the way of sailing the boat at all. The main seating area is forward while the sail controls and winches are aft and next to the helms. The boat can be handled quite easily by two people, while the rest of the party can relax and enjoy the ride.

We jibed our way back toward Annapolis and thoroughly enjoyed a perfect day of sailing. The 54 was easy to sail, fast and felt very balanced and solid underfoot. Just what you would expect from a Briand design and a Jeanneau Yacht.

In 54 feet, there is enough interior volume to really permit the designers to go to town. Jeanneau and Briand worked with the famous interior designer Andrew Winch—super yachts are his normal thing—to give the new 54 and the Jeanneau Yacht line maximum comfort and elegance.

Winch has created spaces below that are both well lit with natural and LED illumination and warm while still being thoroughly modern. The mixture of light colored vinyl overheads with warm Alpi wood joinery gives the saloon and cabins a kind of homey glow.

The 54 has four layout schemes that can be mixed and matched. The standard boat has the master cabin forward, two quarter cabins aft and three heads. The galley in three of the four versions runs along the port side of the saloon and is separated from the huge dinette by a counter that runs fore and aft. This counter provides more working space, is a place to brace yourself when cooking underway and it houses the huge flat screen TV that rises out of it as if by magic.

For a family heading off cruising, this configuration works well. Interestingly, the after cabins can have standard double berths or they can have side by side single berths that would be good for two children or two crew who were not partners.

Jeanneau has also provided a luxury two-cabin version that has the master cabin forward and a second or preferred cabin in the port aft cabin. Each cabin has its own en suite head and shower. The advantage of this layout is that it allows the galley to be moved into the space that used to be the starboard aft cabin. The galley becomes an excellent sea galley and its position in the saloon is replaced by a large settee and and a cabinet that combines useful drawers and a glass-fronted wine cooler. But, of course.

For use in a charter fleet, the 54 can also be set up with four or even five cabins. In the four-cabin layout, the master cabin forward is transformed into two smaller cabins with double berths that are side-by-side and partitioned with a bulkhead that can be removed.

In the five cabin version, a small Pullman cabin is wedged into the space that had been devoted to the after port head. So, if you wanted to, you could take this version of the 54 off cruising with 10 aboard each of whom has his or her own bunk.

The 54 has plenty of headroom in all cabins so you never feel claustrophobic. All drawers and cabinet doors have positive latches that will keep their contents in place when the boat rolls or pitches. And, attention has been paid to adding hand holds accessible by large and small folks alike so maneuvering around the saloon in bouncy conditions won’t be dangerous.

The Yacht series of Jeanneaus—54, 57 and 64—are real high quality cruising boats with passagemaking capability. The 54, for example, has a fuel capacity of 127 gallons and a water capacity of 255 gallons when the optional extra tanks have been added. The galley is equipped with a large fridge and feezer and a second freezer could be added under a settee. There is room aboard to install a genset, the optional huge battery bank and a water maker. The large lockers aft in the cockpit and forward in the bow provide ample storage for extra sails, a spare dinghy, SCUBA equipment and more.

You may not choose to sail away for an extended cruise aboard the new Jeanneau 54, but you should know you can do so when the boat has been fully prepared. Plus, it will get you where you are going at high average speeds and will be easy on her crew. A good passagemaker should carry her crew across an ocean safely and deliver them to their new landfall better rested and happier than when they left. The new Jeanneau 54 is certainly in that category.

For the full review go to…