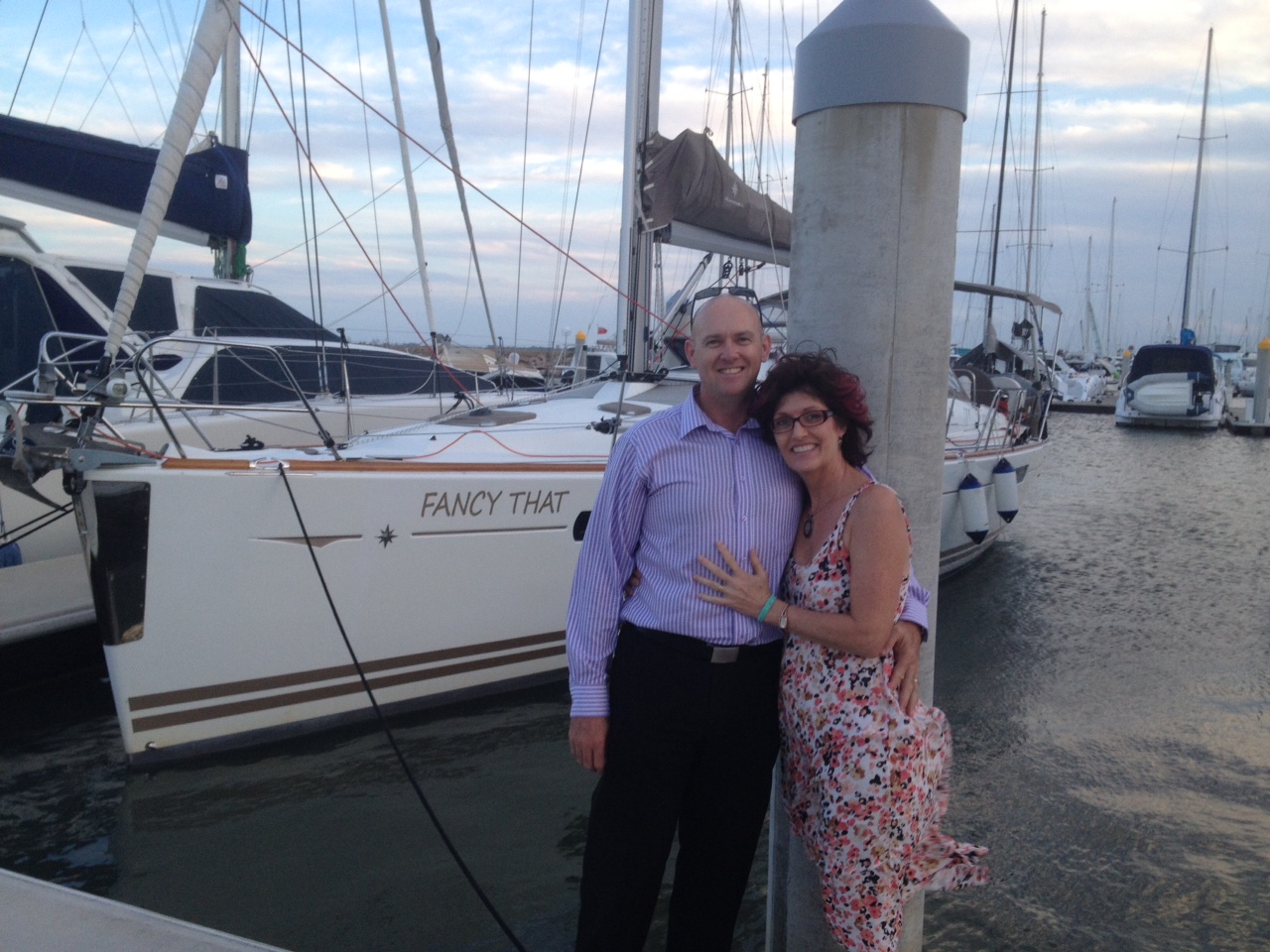 I recently sold a Bakewell White 36 racing yacht with a view to acquiring a yacht that presented more of the creature comforts but still has the potential to be competitively raced in club and offshore races. Following my visits to this year’s Sanctuary Cove and Sydney boat Shows, I gravitated towards the Jeanneau brand of yacht. I particularly liked what the new Jeanneau 40 to 50 foot models had to offer, however the complete set up cost of a new yacht to my required specification was beyond my affordability. This led me to the purchase the yacht “Fancy That” an “as-new” 2 year old Jeanneau DS 42 Performance version. The Contract of Sale settled on Saturday the 2 November 2013, followed by hand over the same day as I had planned to make the most of a southerly weather system to deliver the yacht from Bayview in New South Wales to Royal Queensland Yacht Squadron in Queensland.

Myself and a fellow crew member commenced the delivery from Bayview to Royal Queensland Yacht Squadron on Sunday the 3 November in a transitioning weather system forecasting a southerly weather pattern in the 20 to 30 knots wind range over a three day period. Whilst we knew the wind direction was favourable for the delivery, we were well aware the forecast wind strength and sea state were likely to experience would be challenging. This proved to be the case with a building sea state and a confused sea developing as a result of a 2 to 3 knot south running current and an average southerly wind speed of 25 knots with frequent gusts of 35 to 40 knots experienced. To ensure a safe passage we did find ourselves transitioning from being close inshore to avoid the current and being offshore to avoid high risk coastline areas.

The yacht sailed perfectly and performed extremely well in the extreme weather conditions and under various sail configurations. Limited time was spent sailing under full main and headsail, for the most the sail configurations varied between the 1st, 2nd and 3rd reefs in the main sail with reduced headsails configurations, either furled or poled out. At one stage the storm sails were used over the furled headsail (centre of gravity is higher) but without any main sail. Sailing angles were maintained at around 150 degrees apparent to ensure the yacht was not over powered and could be steered safely. Whilst this tactic mostly worked and afforded a safe point of sail, there were occasions where the power of the waves combined with the wind did over powered the yacht and round up occurred. The yachts ability to recover from such a position was easily done either under sail or assisted by the motor thereby minimising the potential for damage to occur.

The boat sailed within and better than the polar diagrams which was pleasing. On regular occasions the yacht sailed comfortably in excess of 12 knots boat speed with the maximum recorded speed of 17 knots being achieved, albeit ably assisted by a huge following sea. The sail configuration at that time was 3 reefs in the main and a headsail furled to around a No 4 size. The yacht also handled breaking seas very well and I did note the yachts ability to slip sideways for short distances almost as if the keel was not offering enough resistance. I need to think this one through a little more to understand further as I remain a little concerned by this experience (since explained by PBS).

The yacht has extensive instrumentation and navigation equipment which has been fully integrated and available above and below decks. This made the whole sailing experience that much more pleasurable and with shorthanded sailing, the person at the helm had all navigation and radio equipment within reach of the helming station. Having radar and AIS made sailing that much safer in the busy shipping lanes and also afforded connectivity to marine rescue services along the route. Due to the weather conditions and us doing shorthanded sailing we chose to maintain 2 to 5 hour radio schedules with the various marine rescue service stations located between Bayview and Brisbane. They would often comment that they could detect us on AIS which did afford some comfort. I must also compliment the marine services, as on one occasion we missed a radio schedule as we were dealing with a 40 knot blow. The missed scheduled resulted in the marine services not hearing from us for an extended 5 hour period. As a result they had initiated the 1st stage of their emergency response plan, needless to say my wife was at her wits end when she received a call from the marine service saying we had missed our scheduled radio contact and asking if she had heard from us. Their actions and the service they offer makes for safer and better sailing experiences.

Amazingly the yacht was very dry with minimal water coming over the bow and across the decks. Any wet experience was the result of a side slap from the sea. Below decks was dry without any form of leaks or ingress of water down the companion way. In all my years of sailing this is the first “dry yacht” I have had the pleasure of sailing on.

Some key statistics of the trip are summarised below:

Watches – 2 hours on 2 hours off, off time below decks, on deck person harnessed on

Guidance sought – Many a prayer was said and answered

The delivery trip in the conditions experienced afforded me an early introduction to the yachts overall performance in heavy weather sailing, to the point that I feel very comfortable in my understanding of her limits. Having transitioned from a racing yacht to what I would class to be a cruising yacht, I am very pleased with the overall performance and sailability of the Jeanneau DS 42 Performance, and I would like to thank Lee Condell of Performance Boating for his professionalism and assistance in acquiring her.