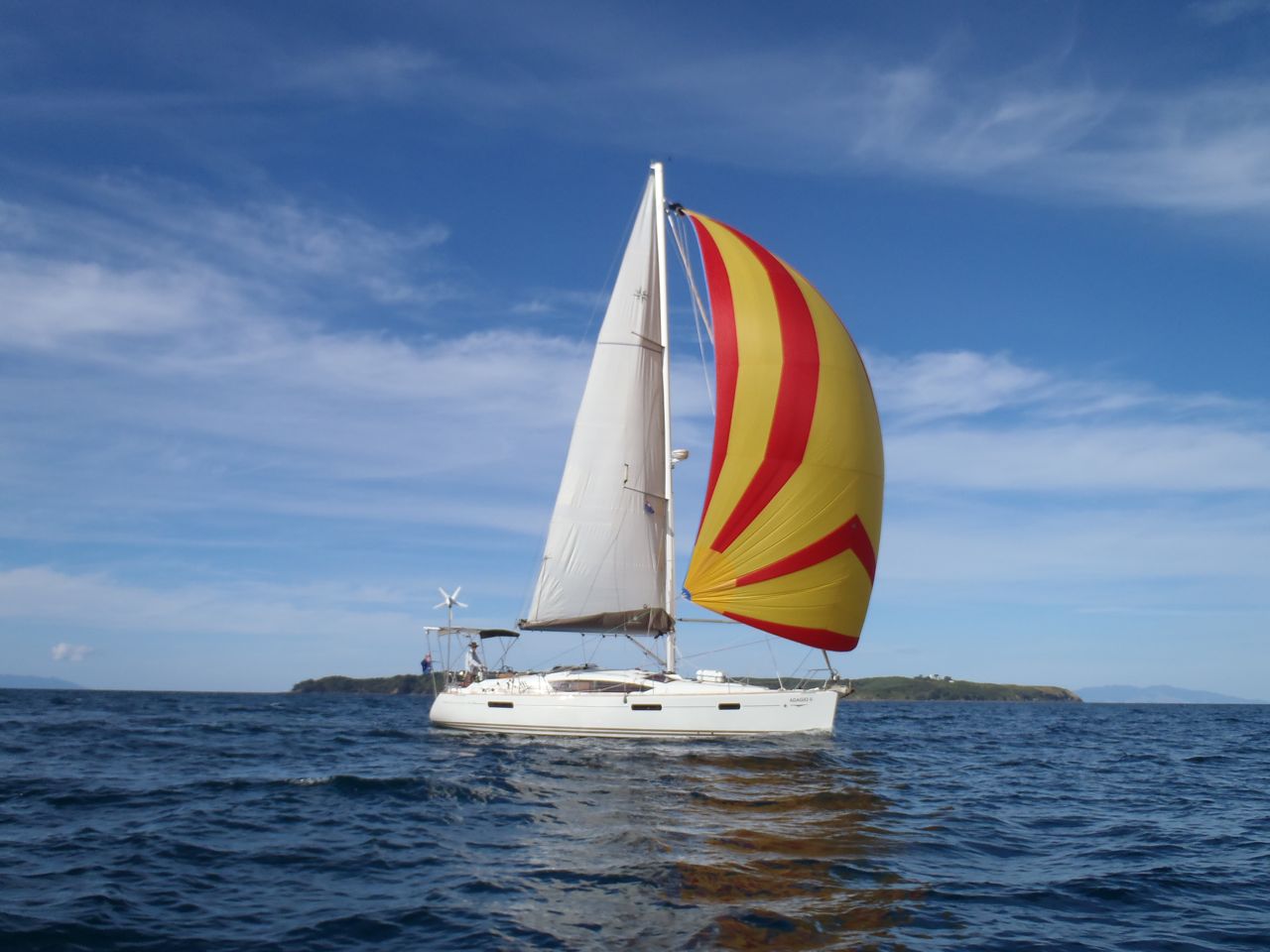 Our boys had grown up and left home, we had money saved up and no reason not to start the next chapter in our lives – a world cruise. This was a long held intention of mine, one my wife Maryanne knew was inevitable and agreed to go along with. As a compromise on a full “round the world for as long as it takes” version we had agreed on a 2 year Mediterranean, Caribbean and Pacific voyage.

For the previous 6 months we had been wandering the docks and marinas of Hobart and searching the internet looking for yachts satisfying several criteria; safe at sea, easily sailed primarily by me, comfortable, open and light interior, readily bought in Europe and sold in Australia, a known and trusted make, well engineered, aesthetically pleasing and within our budget of $2 – 300,000 fully equipped for ocean cruising. Our search lead us to the Jeanneau dealer in Hobart where a Sun Odyssey 42 DS was moored.  It filled most of the criteria but the 3 cabin layout meant the owner’s cabin was too small for Maryanne’s liking. We were being shown over the yacht by a friendly Jeanneau owner who happened to be passing by and on hearing our reservations he invited us aboard his 39 DS which had a 2 cabin layout. The king-sized berth and gracious feeling of the vast aft cabin instantly won Maryanne’s approval and that was it. We arranged to buy a new 42 DS with the 2 cabin layout to be commissioned in Antibes, France and named her Adagio II.

During the following 2 years we very happily cruised Corsica, Sardinia, the Mediterranean coasts of Italy, France, Spain, Gibraltar, crossed the Atlantic via the Canaries, Capo Verdes, to the Eastern Caribbean Leeward Islands of Iles de Sainte, Guadeloupe, Antigua, Barbuda then down the chain to Granada, via the San Blas Islands to Panama, through the Canal and across the Wide Blue via the Marquesas, Tuomotus, Tahiti, Bora Bora, Suvorov, Niue and Tonga to New Zealand. The final leg from New Zealand to Sydney via Norfolk Island was completed all on one tack ending after 11 days with a spinnaker run to the Heads. A magic trip, a lucky, happy boat, many friends made, many, many wonderful memories. We sold our lovely yacht to an enthusiastic cruising couple through the Pittwater Jeanneau agent Performance Boating the day we put her on the market. She had fulfilled and exceeded all our requirements to the end and now is ready to do the same for her new owners. Derek & Maryanne Shields, Cygnet, Tasmania.

Thanks to Derek and Maryanne for listing it with PBS and for this summary of their fantastic voyage. We wish them well.