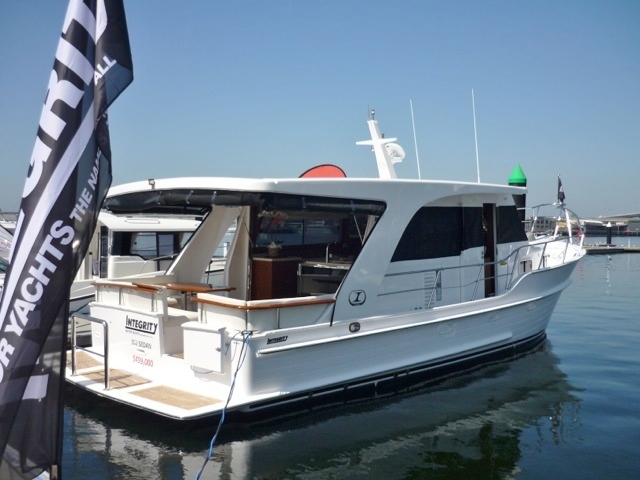 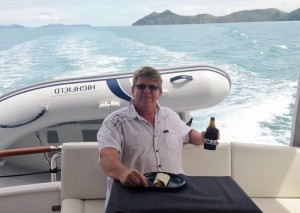 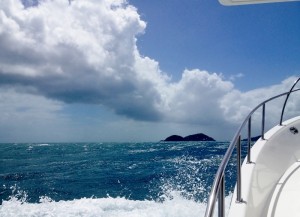 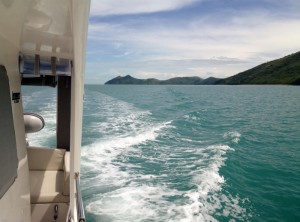 The second stage of the delivery of our latest Integrity 340 Sedan “Kariba” from Mackay to Cairns from, where it’s then being sailed across the Coral Sea to PNG and up to Madang, was postponed for 4 days whilst the Cyclone past. Many have commented that they wouldn’t expect a 34 foot trawler-style boat typically used in rivers, bays and canals, to take on such an adventure, well I’m here with hand on heart to vouch that we kept saying “what a great sea boat” it is.

As you know from the last report we’d (Dale, an old sea dog and myself) left the boat safe a secure in Mackay Marina with the care of the live board marina residence keeping an eye on her whilst we returned to Sydney for other commitments. Once the monsoon trough and cyclone Dylan had passed it was time to continue the delivery. Full of fuel as we headed out the marina entrance to blue skies, now I know what they mean by the calm after the storm, yes there was a few logs and debris near the river outlets and tide lines, but we both took turns in sitting on the bow and keeping a look out adjusting the pilot to navigate away from the tide lines. We passed through the Whitsunday passage in the most beautiful weather and decided that we’d push on from our planned Nara inlet anchorage to Nellie Bay for that’s night stop. Arriving at dusk the anchorage was too swelly from the SE leftovers from the cyclone, so up came the anchor for a quick passage between the cloud capped Gloucester Island and on to Jonah Bay, a much better night’s anchorage.

At first light we set course for Cape Upstart and with a favoured tide we were making good time, as we were anxious of a new low forming to the East and the sea was now building from the stern in a fresh SE wind. The “great sea boat” was handling the swell so well, surfing down waves in complete auto pilot control, that we could sit in the cockpit both keeping an eye out by looking up the side walkways for any possible debris and enjoy a few movies on the TV / DVD. Time just flew and by sunset we navigated into Nelly Bay Marina with our average speed for the day just under 9 knots, using about 12 litres of fuel per hour. Whilst docking in the greatest downpour both Dale and I had seen, and drenched through, friends in Mackay called and we’re shocked that we’d made it to Magnetic Island as they were experiencing strong winds and rain. Mother Nature was looking after us.

Now the forecast was for a new category 1 cyclone forming in the coral sea called Edina and was heading in a south west direction towards Bowen (now south of us). We planned to leave at first light and get as far North as we could being on the preferred side of a cyclone and we’d pass through the Air force bombing area north west of Magnetic Island, a funny story in itself. I call the Air force in Canberra trying to find out if the area was open as per the book “Cruising the Coral coast”, then transferred to a Captain in Darwin I believe, saying you can’t enter this area under any circumstances, but by the end of our conversation being given permission for us only to pass through and ensure that we don’t put a foot on any of their islands! Of course I agreed, although we were already in the area and hadn’t expected the Air force to be carrying out manoeuvres with a cyclone nearby.

Again we had another easy passage, this time up the east side of Hinchinbrook Island, a massive high sided cloud-capped island also being rained upon, whilst noting that we were in sun light with the occasional shower looking westward. “Could this be any easier” Dale commented. The sun set whilst we entered the very secure harbour of Mourilyan to find that this is where all the live-aboard people had hidden from the cyclones.

Edina had now fizzled out but leaving in her wake big seas of 3 to 4 metres for us to run with on our last day motoring on Kariba. Up past Mission Beach where Dale recalled a time many years ago when his father took the family Holden for a fast drive up the beach with him in the back.

Passing very inviting islands and reefs, we motored into Half Moon Bay Marina, also called Yorkeys Knob Boat club, where a berth was arranged. The boat was filled with fuel to work out our speed and fuel consumption so that we could pass this on to the PNG delivery team, the statistics being a total distance from Sanctuary Cove on the Gold Coast to Cairns of 932 nm, using 1561 litres of fuel and the engine running for 123.1 hours. Having sometimes run the engine harder to bed it in during the running in process, this gave us a consumption of 12 litres per hour at an average speed of 7.5 knots.

My conclusion from this very eye opening experience was that firstly MOTHER NATURE should be taken with respect, secondly communications be it phone or internet is vital for up to date information, thirdly make your own informed decisions based upon conditions and the capability of your vessel, and finally be prepared for anything.

I must add that “Kariba”, the great sea boat, performed above expectations and had no surprises in any way, she just kept chugging along, dry and stable. It’s a credit to the design of this trawler hull and the ergonomics throughout which made this trip a once in a life time dream come true. Many thanks to Lynton for allowing me the opportunity and I encourage anyone reading this who aspires to doing a trip like this to get out there and do it!

For further details on any of the range of Integrity Motor Yachts contact PBS on (02)99799755 or email info@performanceboating.com.au