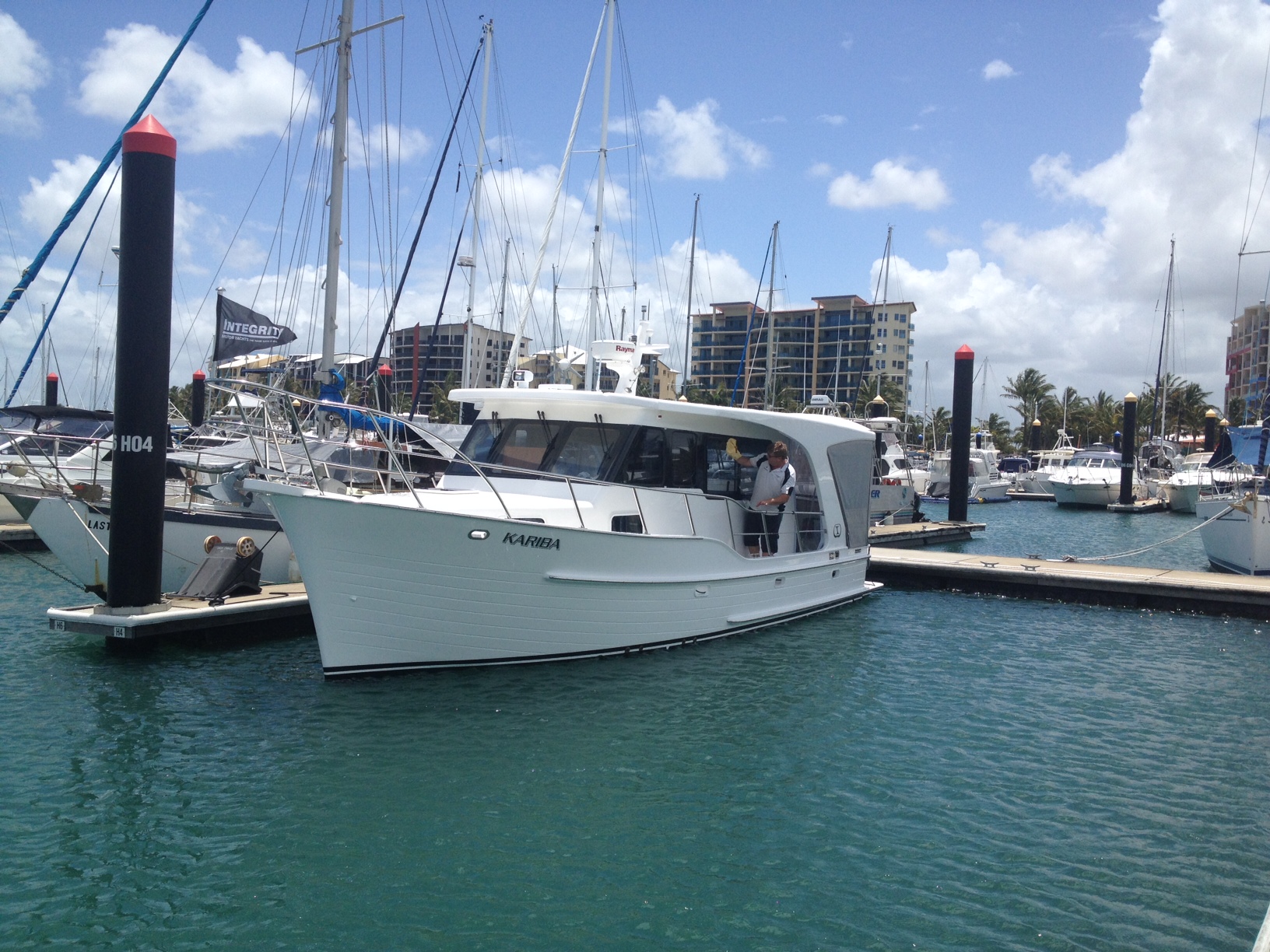 Adam Workman from Performance Boating talks about the delivery of a new Integrity 340 Sedan from Brisbane to Mackay:

An opportunity came for me to delivery one of our latest Integrity 340 Sedans from our commissioning yard on the Gold Coast to Cairns, where it is then to be motored to Madang in PNG, where its new owner awaits its arrival. I thought what could be a better way of describing one of our boats than to experience it for myself, along for the ride was an old mate and owner of a 1959 30’ Halverson Dale who’d travelled this coast many years back.

Full of fuel we set off for Mooloolaba for our first night. Having navigated the Coomera river, the many channels of Moreton Bay, and then to the open sea north of Moreton Island with a southeaster and slight following sea we had a pretty uneventful trip apart from the dugongs, turtles, ships, and sand banks to look out for. We subsequently arrived in Mooloolaba late in the afternoon.

Topping up the fuel tanks to see the actual consumption I was impressed that we only used 14 litres per hour after the John Deere’s advice to run the motor harder than normal for the first 25-50 hours to bed the engine in correctly. From Mooloolaba the trip plan was to arrive at Wide Bay Bar (known as one of the 10 worst seaway bars to cross on the QLD coast) at slack water, arriving about ½ an hour before the tide change we contacted the local patrol for up-to-date advice on crossing the bar, well worth the call as the leads were just about impossible to see and the two turning points had moved from when the charts had been updated. With a 1.5 to 2 meter south-east swell and little or no sea from the northeaster we crossed the bar, the boat just sat on the back of the waves and as they passed underneath we felt very secure, no signs of turning or sliding. My first big test has proven to be a pleasant experience, so tick for the Wide Bay Bar crossing.

Now on the inside of Frazer Island and the navigation of the many mud/sand banks with an incoming tide. By dusk we had reached the more open channels and we made the decision to motor through the night to arrive at first light off Lady Elliot island. During the night, being north west of Frazer and out of the protection of the Island and Great sea spit and open sea to our east, the seas and swell had increased to 2.5 meters and were coming at us right on the beam, the least comfortable for any boat. On auto pilot and using the plotter, AIS, and Radar, closed up inside the cabin we had a very dry and comfortable crossing, even the occasional big wave didn’t upset our progress. In many ways the boat had a yacht type motion as though it had a 7 foot keel, rock roll then flat–rock roll then flat, no pitching or sliding. Our biggest concern was keeping an eye out for the ships crossing to Gladstone, although the AIS and radar would tell you their direction, speed and if you’re on a collision course, gone were the days of trying to work out – Is that a ship? Which ways it going? Etc.

Arriving at dawn the little island of Lady Elliot was a great sight in a big open sea. After a refreshing swim and breakfast the decision was to motor over to Lady Musgrave for an overnight tropical island stop. Lady Musgrave is just that island with a huge lagoon and small island, and the advice to enter with the sun high was great as the entrance to the lagoon and the one plotted on the chart were about a boats width out, thus required Dale to stand on the bow and direct our course through and avoid the coral bommies. Once inside we chose a space away from the other moored boats, watched the sunset over the island, the occasional turtle coming over to see and of course a swim in the bath temperature water. So another tick on the bucket list, anchor inside a reef with a tropical island.  The following morning we set off for a pretty direct passage to Great Keppel Island at the same time a large cruising yacht left and paralleled us down to the Capricorn group, they motor sailed and we just sat on our now great cruise speed of 7.5 to 8 knots passing through Polmaise and Mast Head Reefs and on to a very busy anchorage on the north west side of Great Keppel.

The following day with a following sea from the southeast and increasing to 2 to 3 meters plus a strong following breeze we decided to head into Rosslyn Bay to again top up with fuel before motoring beside the coast to Pearl Bay for that nights anchorage. On the trip so far we had averaged 7.5 knots using 7.9 litres of fuel per hour and covering nearly 420 odd miles, all without incident nor drama.

Pearl Bay was truly beautiful. A lovely beach down to a protected bay with an offshore island covered in pines, this would be a great anchorage to come back to one day and get away from the world, a new item on the bucket list. Pearl Bay to Mackay is 118 miles and we decided that the weather wasn’t going to improve, so a planned long day in following seas and swell passing through the Percy Island group and the Beverly group, basically following a rum line to Mackay Harbour, we discovered that the boat, in what could be called a very confused sea, particularly around the Digby island that the auto pilot was over working trying to anticipate the direction and thus over steered the boat, so we adjusted the sensitivity of the controls from “performance” to “cruise” mode. The boat now rode up on waves and surfed down the biggest waves we’d seen since leaving the Gold Coast. We each in turn watched the plotter and pilot for the maximum speed read out, 12 knots, 14knots and then a 15.2 knots the best speed we’d seen, all the time feeling so secure that you could walk up the side of the cabin to the bow and ride down the waves and watch the islands go by. Now this was a test for a boat if there ever was one. I’d heard of power boats surfing down waves turning sideways and becoming broached, not on this little 34 footer, solid is the word that came to mind.

We navigated the moored bulk carriers southeast of Mackay just on dusk. Losing count of them we turned into Mackay Marina about 8pm, where we’d arranged a berth for a few weeks whilst we returned to Sydney for Christmas and New Year’s. Next will be the final leg from Mackay to Cairns so keep an eye out in the next newsletter.