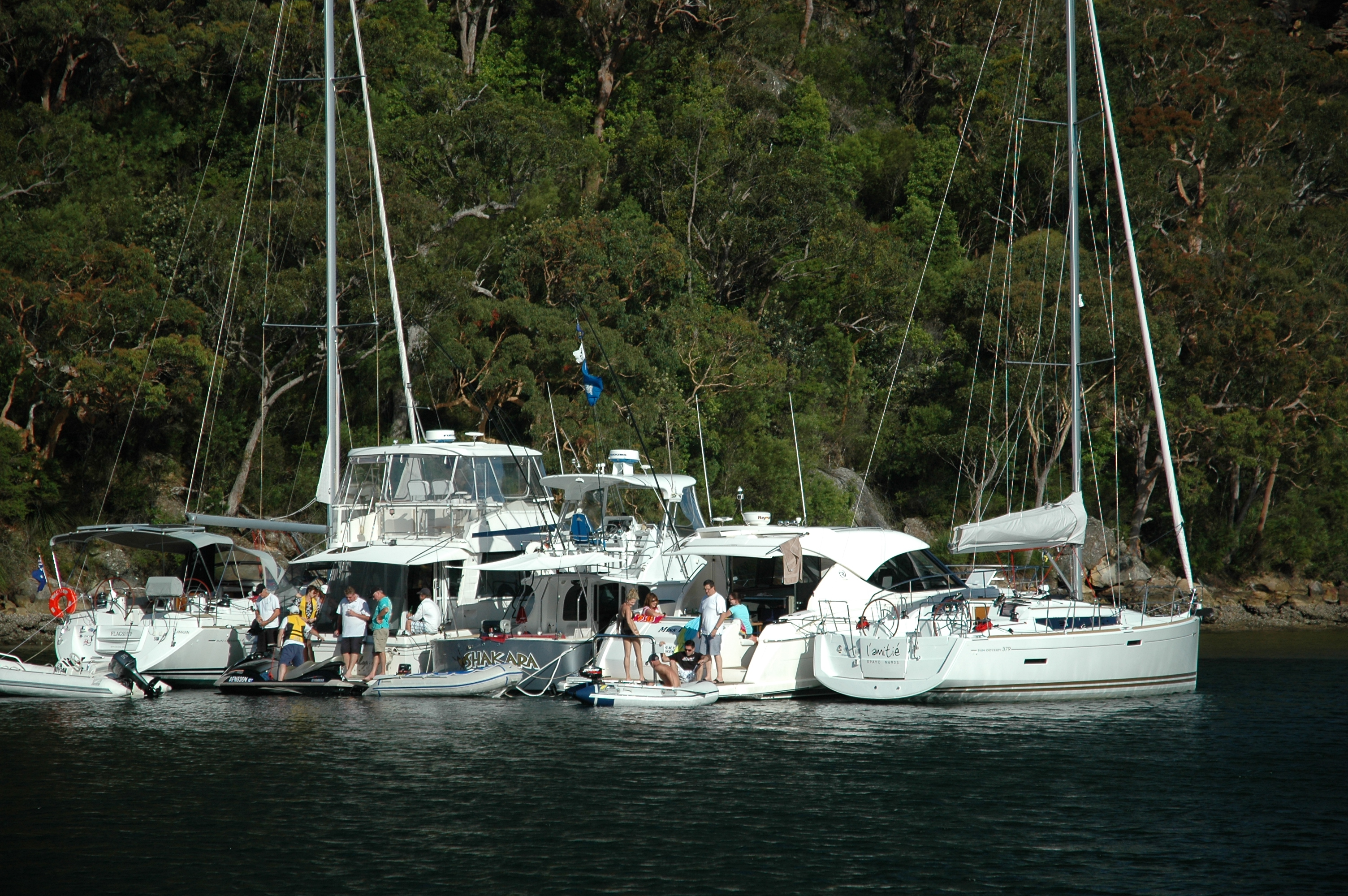 The visitors inform me that it’s Sunday, their day off from work and only chance to get away for a brief view into our escape. “So someone is working and keeping the country open,” I think, at the same time wishing everyone could have this break. We return to the boats with me pointing out the Sea Eagles, Whistling Kites, and this boat that’s up from Tasmania, or that one which has come from Melbourne …

To return the day guests we decide to move to Refugee Bay after dropping them off at Cottage Point and raft up on a permanent mooring that one of the owners has access to. This way we can leave two boats and return to the Cottage Inn Restaurant for a meal we haven’t had to cook ourselves, despite it being a touch expensive and none of the men wearing anything presentable, most sporting thongs, for example. The women, of course, are all dressed in amazing attire. Maybe there was some preplanning. Hmmm…  Full of food we walk the ramp to the dock where Miss P is tied up, and return to Refugee Bay for the night.

The next day we decide to venture up to the opening of the Hawkesbury River, Mullet Creek, with one skipper planning in detail how the day would go, and using books and maps to tell us about deeps, tides and things to see. Again we decide to leave two boats on the mooring and use just one to transport all of us, and tow a tender to pick up supplies at Brooklyn. We arrive at Brooklyn Wharf just after the ferry has left so are given strict timing: 15 minutes to get oysters, local of course, and prawns to eat up at Mullet Creek for lunch. We jump off, the blokes heading straight to JJ’s seafood about 100 metres from wharf, as the ladies aim straight for the dress shop. We all return within our time frame with oysters, NO prawns and two sundresses! No prawns? Well, the fresh ones are 15 minutes away so the decision is made to explore the creek, return to Brooklyn and have fresh prawns and oysters afterwards.

The northern train track hugs the banks of Mullet Creek on one side, with the other lined by oyster beds. We go easily go over the shallow area and venture to the head of the bay, passing habited houses or shacks only accessible via water. A few are for sale, I wonder. “For how much? Could I do it ?” I wonder as we pass a father and child swimming off their rickety wharf and giving us a gentle wave that says how great this is.

We drop anchor near the head of the creek with some staying on board. We explorers man the rubber duck to discover what’s at the end, after reading in one of the explorer’s books that there are aboriginal drawings. We feel like early English settlers exploring everything that can be explored. What brings us back to present is the occasional train that winds past as we reach the end of the creek, and the rail bridge that leads straight in to the tunnel. And oh, the inflatable boat with outboard motor!

We return to the others who listen to (but don’t believe) the amazing things we’ve seen. We return to Brooklyn to pick up the fresh prawns, and tie up at the wharf to eat oysters, prawns and hot battered fish, also from JJ’s, followed by ice cream. While waiting we call some more friends, and convince them to jump in the car and drive to meet us for a New Year’s party tonight at Refugee. Once they arrive and are fed, we return to the other boats, swim ashore to the beach and while waiting for the last day of 2012 to wind down so we can begin partying on board to welcome in the new year.

Oh no! New Year’s Day and time to return to the real world. We hang out for as long as possible, each knowing we have to break apart as we motor slowly back into Pittwater. We sit and reflect on the five days and five nights we’ve just had as we round west head to encounter Pittwater things going this way and that. The more you motor up to the end of the bay the more normality returns. We discuss next year: Should we make it six days and six nights?