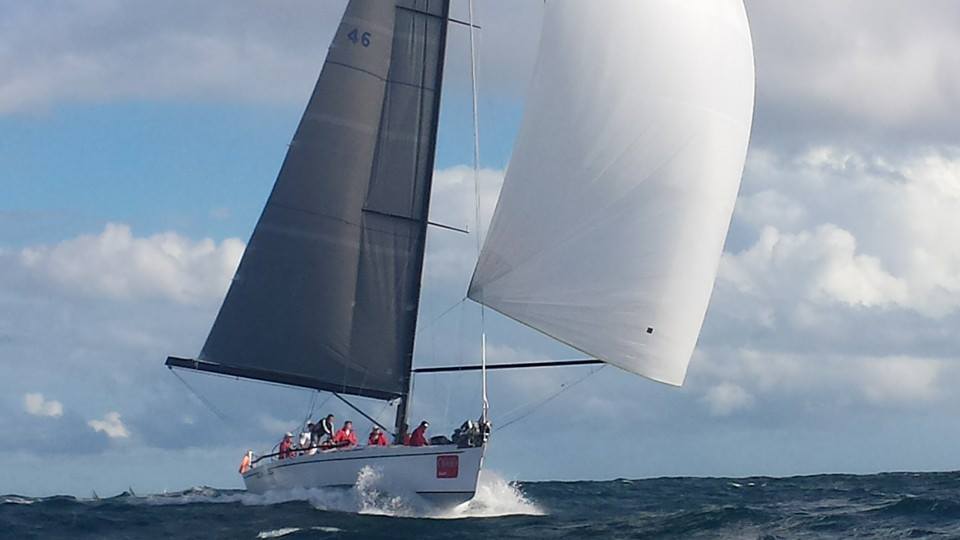 By Performance Boating Sales director Ron Jacobs, who has been assisting in the role as Sailing Master.

Rob Reynolds optimised 2005 DK46 has just finished a successful 2014 summer racing program based on lifestyle locations, finishing on the podium in all the events she entered.

Starting with the Coffs Harbour Race & series with a 2nd Overall IRC in the passage race to Coffs & 1st on IRC in the 5 race Regatta series. Also winning the Australian PHS Championships .

Next event was the Sydney Harbour Regatta with yet another win under IRC in the series against some very stiff competition including the TP52 “Quest”, “Nine Dragons” & the new 60-foot “Ichi Ban”.

Rob then entered “Exile” in the 420 mile Lord Howe Island Race & despite the weather conditions (hard running & reaching) not being “Exile’s” ideal conditions, she finished a very creditable 3rd Overall IRC. It has been many years since I last did the race, and as always was very tactical with working the strong currents between Pittwater & Lord Howe critical to the result. Once on this stunning island we enjoyed 2 days recreation, relaxed & enjoyed the meals provided at the Anchorage which were excellent. Definitely a place to visit either by yacht or plane.

Two weeks later saw “Exile” racing out of Newcastle harbour over the Easter break at the Australian IRC National Championships in Division B. The two DK46`s “Nine Dragons” & “Exile” went hammer and tongs at each other throughout the regatta with “Nine Dragons” claiming the honours on this occasion. “Exile” finished a close runner-up with the former Division B National Champion “Ikon” from Melbourne in 3rd place. Newcastle has become a fantastic stop over with a great marina & restaurants. We thoroughly enjoyed our time there!

PBS have a range of racing and cruiser/racing yachts on our books and can help you to achieve your goals in yacht racing. See our website here for our current listings