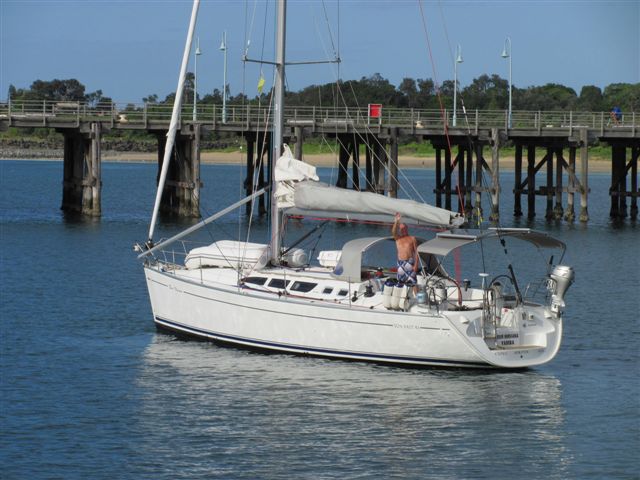 After months of will we – won’t we, “Our Nirvana” was finally prepared for the Tasman crossing and everything was ready, except the weather. A series of lows dropping out of the Pacific put a hold on everything until finally on the 2nd of January, I set off solo for Opua in the Bay of Islands. A southerly course to 36 degrees South paid off and nice reaching conditions prevailed for most of the trip until yet another low passed 100 miles from North Cape to give a nice 30 knot bash for 24 hours. Russell radio assured me all was good on the East coast and they were bang on. After 7 ½ days, customs done, we had 7 weeks cruising Great Barrier Island and the Bay of Islands. We could only smirk as we heard reports of rain, rain and more rain back in Coff’s Harbour, as we had the opposite. Beautiful stable weather, big snapper, heaps of greenlip mussels & oysters by the bucket load.

Finally time to come home and another 7 day trip back to Coff’s with a bit of everything, but nothing above 30 knots. I couldn’t fault “Our Nirvana” and we had no problems at all & credit Ron, Lee and the team at PBS for introducing us to her as she proved to be a strong, fast cruiser, albeit a bit of a handful for an old bloke single-handed sometimes!