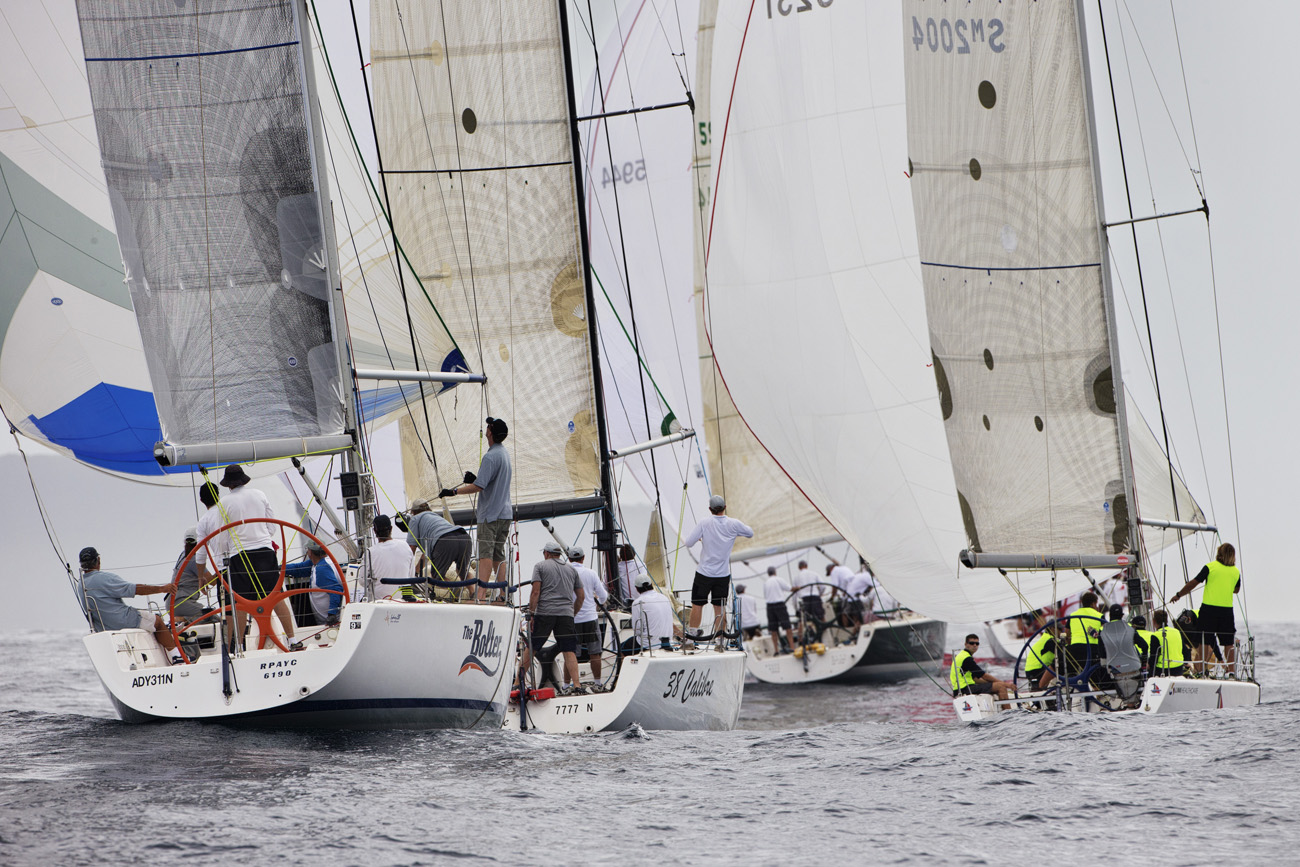 High humidity, barely any breeze, sloppy seas and 50 shades of grey sky and ocean off the exclusive northern beaches suburb of Palm Beach added up to a difficult opening day of the Sydney 38 Australian Championship, part of the Performance Boating Sydney Yachts Pittwater Regatta.

Each and every crewmember worked hard to keep what momentum they could muster. The trimmers sweated, the tacticians concentrated without let-up and the steerer worked overtime to prevent the boat from slowing down, and all the while the rest of the crew used their weight to keep the hull flat and balanced.

A slow-moving high pressure system near New Zealand was forecast to direct east to north easterly winds along the New South Wales coast. Instead a light sou’easter in race one petered out so at the end of race two, with no more than 3.5 knots blowing and the heavy cloud cover and damp sea mist quashing the chance for a turnaround, the Royal Prince Alfred Yacht Club’s race committee reluctantly pulled the pin.

Ferguson described the day as “very light and tricky, and lumpy as well. It was about keeping the boat flat and the crew weight right, you didn’t want to let the boat slow down at all.” He reckons tomorrow looks similar then Sunday the winds might return to close the competition for the 38s and the fleet of Sydney 36s joining the regatta from tomorrow, Saturday February 21, 2015.

Second-placed skipper Brenton Carnell on Phoenix agreed conditions were both testing and frustrating. “The conditions were very hard to steer to. The trimmers worked overtime trying to keep the pace and our tactician was flat out too, plus the rest of the team were keeping their movement to a minimum to preserve the right balance. We had a good comeback in the second race to get to third. We are happy where we are; hopefully there’s more breeze tomorrow.”

Class President Greg Clinnick said considering the Victorians aren’t used today’s conditions they faired pretty well. “It was tough out there today, we aren’t used to light, sloppy conditions. For Whisper to get two bullets was a real credit.”

This afternoon 15 Victorian and NSW Sydney 38 crews are enjoying quenching ales on the RPAYC marina thanks to 316 Fasteners who sponsored complimentary beers on the dock for the crew post racing – a well-deserved reward for a hot and thirsty work out.

The effects of Tropical Cyclone Marcia are expected to bring strong to gale force winds along the New South Wales north coast. There’s nothing wind-wise to cause the organisers or sailors any concern as the series plays out over the weekend, but Principal Race Officer Steve Merrington says he will be keeping an eye on the cyclone’s influence on the swell and overall sea-state.

Racing is due to recommence tomorrow at 1100hrs and with south-east winds expected it’s highly likely the same course area will be used.