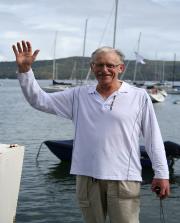 Sailing is a passion of mine, but it has only been in recent years when I first purchased my Laser at age 50, I had a lot of fun racing at Northbridge Sailing Club.

The first keel yacht was a compass 29 (1976 model) which was solid but very slow but a great yacht to learn on.

The second yacht was a Northshore 380 which I shared with 2 other families. This was a lot faster & more comfortable but when I moved to Pittwater it stayed in Sydney Harbour.

With retirement looming and being without a yacht, Guinevere came on the market and it met a lot of my criteria. It was large enough to sail across the ocean, had a lot of safety equipment and cruising ability, the accommodation had a huge double bed which Julie found extremely comfortable.

Now that I had the yacht I was in a position to realise my long term dream of doing a long distance sailing trip but at that stage had not decided where.

I read in a sailing magazine about a round Australia Rally which had something like 200 yachts entered, I entered, but unfortunately a lack of sponsorship forced the event to be cancelled.

By this stage I was so keen on the idea that I decided to plan my own trip.

Julie was supportive of the idea but not keen to do the ocean sailing, the idea of going to France cycling, walking and practising French was far more appealing !

This left me in the position of having the dream, the yacht, the time but no crew. This is how the idea came about of dividing the trip into 15 legs and inviting friends, relatives and anyone interested to join me.

A problem was my lack of experience and qualifications so in the last couple of years I have done quite a few courses such as Radio Operators, Marine First Aid, Sea Survival and Off Shore Yachtmaster Theory.

Guinevere also completed a trip to Lord Howe island to get up some sea miles and ocean experience.

The website www.guinevere.net.au was a sixtieth birthday present and tracks the progress of this adventure.