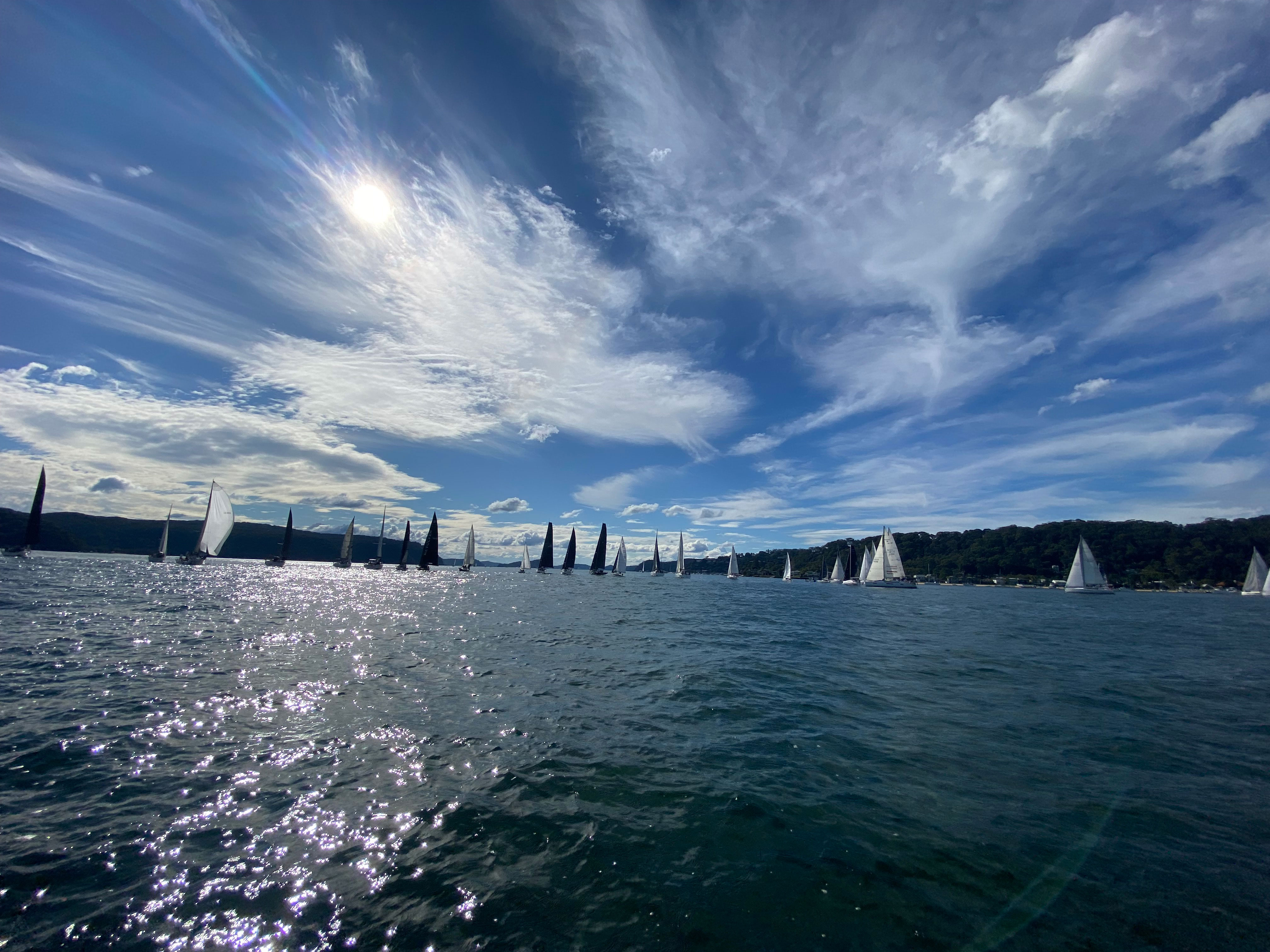 On Saturday the Jeanneau fleet were greeted with a fine sunny morning for our 2022 Jeanneau Rendezvous celebrating our 20th year representing the brand!

We started the day with the briefing at the Royal Motor Yacht Club, with morning tea provided by our primary sponsor, The Quays Marina. They also gave us the use of their 14m RHIB as a committee vessel, which made it very comfortable for the PBS crew.

Pantaneius Insurance were also on board for the day supplying their RHIB with a photographer and driver. Once the briefing concluded crews leisurely headed for the yachts to prepare for the days sailing.

The cruising division started off RMYC at 11.30 with a questionnaire to fill out that would take them up the East side of Pittwater to Snapperman Beach, back along the Western shore to Woody Point, and then back towards the RMYC.

In the racing fleet the spinnaker division got away at midday, with non-spinnaker five minutes later, purposely from a line South of the RPAYC who were starting the final race in their Lion Island series.

Despite discussions the previous day the RPAYC chose to extend their starting line pretty much across the entire width of Pittwater to accommodate a 100-boat entry, thus being in the path of our fleet as well as any other boats heading out for the day.

To compound the situation the fickle breeze had both fleets mixed. With the size of the combined fleet of 125 yachts fighting for clear air, boats forced each other to the Western shore and into the wind shadow, so yachts were going in all directions! Very spectacular, but a little daunting trying to avoid each other.

Both Jeanneau divisions had Stokes Point as their first mark. The spinnaker division boats not surprisingly made it first side by side with the Sun Fast 37 “Midnight Promise” being forced the wrong side and having to do a 360, the 44DS “Accountability”, SO349 “Pinta Bay” and SO440 “Ca Va” made it though but then had to content with trying to find a path through the RPA fleet to make it to the Mackerel Beach mark. “Midnight Promise” stayed low and managed to sail though to leeward of the others to round the 2nd mark 1st, closely followed by “Pinta Bay”

In the meantime, a group of the non-spinnaker division also rounded Stokes together with the 44DS “Sea Pearl” looking good, along with the SO409 “Mirage”, 39DS “Isabella”, and SO44i “Weekend Option”. Behind this initial group was the new SO410 “Cheeky”, which cleverly went left to keep out of the traffic and looked like they were going to make it into their 2nd mark Soldiers Point in the lead, only to be sailed over the top of by an RPA boat that had been stuck in a wind shadow. “Weekend Option” seized the opportunity and turned inside them and took off back to Stokes. “Cheeky” recovered well, but after rounding Stokes for the 2nd time took a tack which cost them dearly.

Back in the spinnaker division “Midnight Promise” was showing the way with “Pinta Bay” on their heels, but after re-rounding Stokes “Pinta” took a clearing tack which didn’t pay off.

The final leg to the finish ended up being a close reach in nice breeze. The clear line-honours winner was the 44i “Weekend Option”, finishing a full 2 minutes ahead of second home “Sea Pearl”, then three boats finished within 35 seconds with the SO42i “Blue Tango”, “Isabella” and “Cheeky”. However, the SO349 “Sahara” did exceptionally well to finish just over a minute after this group.

Then followed the first of the spinnaker division with “Midnight Promise” a convincing winner, followed by “Pinta Bay”, the SO469 “Caravella”, “Mirage” and the 42DS “Kai Rani”.

On finishing the fleet headed for home and those on the marina at RMYC mingled and caught up while preparations were made for the evening function, and the results were calculated.

The function commenced at 6pm with the results of the Cruising Division questionnaire. Visiting from Melbourne the owners of the SO490 “Hokusai”, David Hodge & Charmaine Dunstan, were the only ones to correctly answer all the questions correctly to win a bottle of wine.

Then followed the handicap results for the non-spinnaker division with Matt and Rebecca Simms taking 3rd on “Isabella”, Jeff Muskat on “Sahara” 2nd and the deserved winner David Clyne on “Weekend Option”.

In the spinnaker division Onno Schenk & Deb Clarke took out 3rd on the SO379 “Mynooka”, with Frank Milner’s “Pinta Bay” 2nd and again the deserved winner sailing two-up were Peter & Tanya Graham on “Midnights Promise”.

Prior to the commencement of the meal, Jeanneau Ambassador Peter Lewis assisted with the first round of spot prizes, with James from Pantaenius Insurance on hand to give additional gifts. Our sponsors provided gift vouchers and prizes totalling $15,000 in value with a prize for every boat entered. We are extremely grateful to all our generous sponsors listed below!

The evening meal commenced with wine on the tables provided by Performance Boating, and after the main course the spot prizegiving recommenced. For the three major prizes all boat names were put back in the hat with the SF3300 “Beluga” winning a Lily Pad from Pantaenius, and the two $1500 antifoul vouchers from The Quays Marina being won by the SO36i “Allegra” and SO379 “Red Cloud”.

Once the meal had concluded we were treated to a slide presentation from Dirk Muller and Annie Schady on the amazing circumnavigation adventure on their Sun Odyssey 439 “Esprit III”.

Having had several years with either no wind or too much it was terrific to have a day with enough wind to get around a course and given the last six months having a fine dry day was a bonus. We’ve been very lucky in that we just managed to have our Rendezvous at Darling Harbour 2 years ago just a week before lockdowns started, and again were able to get together last year at Akuna Bay. Given all the restrictions and limits over the past year it was especially good to be able to enjoy each other’s company for this day of celebrating a significant milestone in being the 20th anniversary that the Jeanneau sail dealership has been represented by PBS.

PBS would like to thank all of those Jeanneau owners who came and took part in the event, especially those who brought their yachts from the Central Coast and Sydney Harbour. 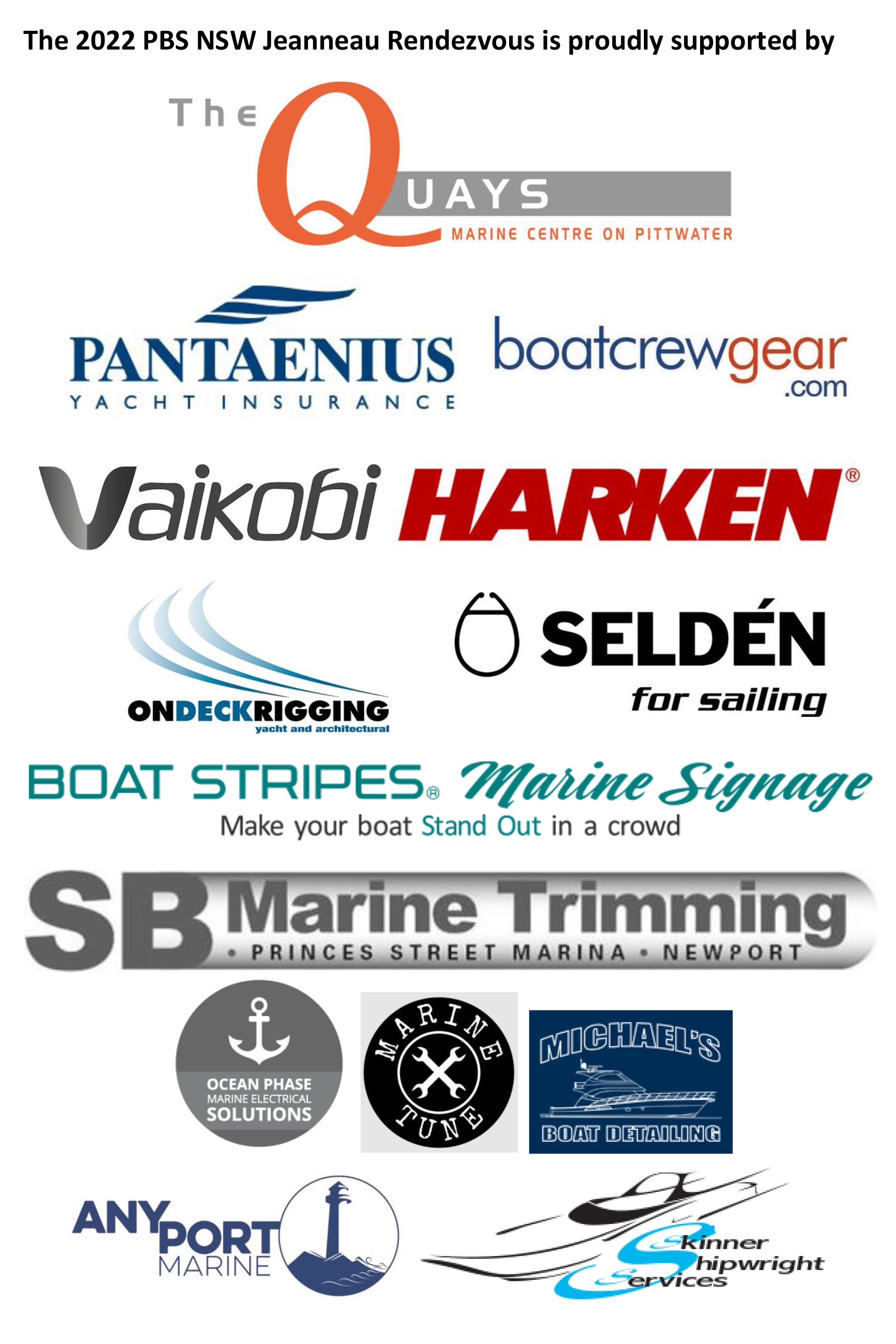