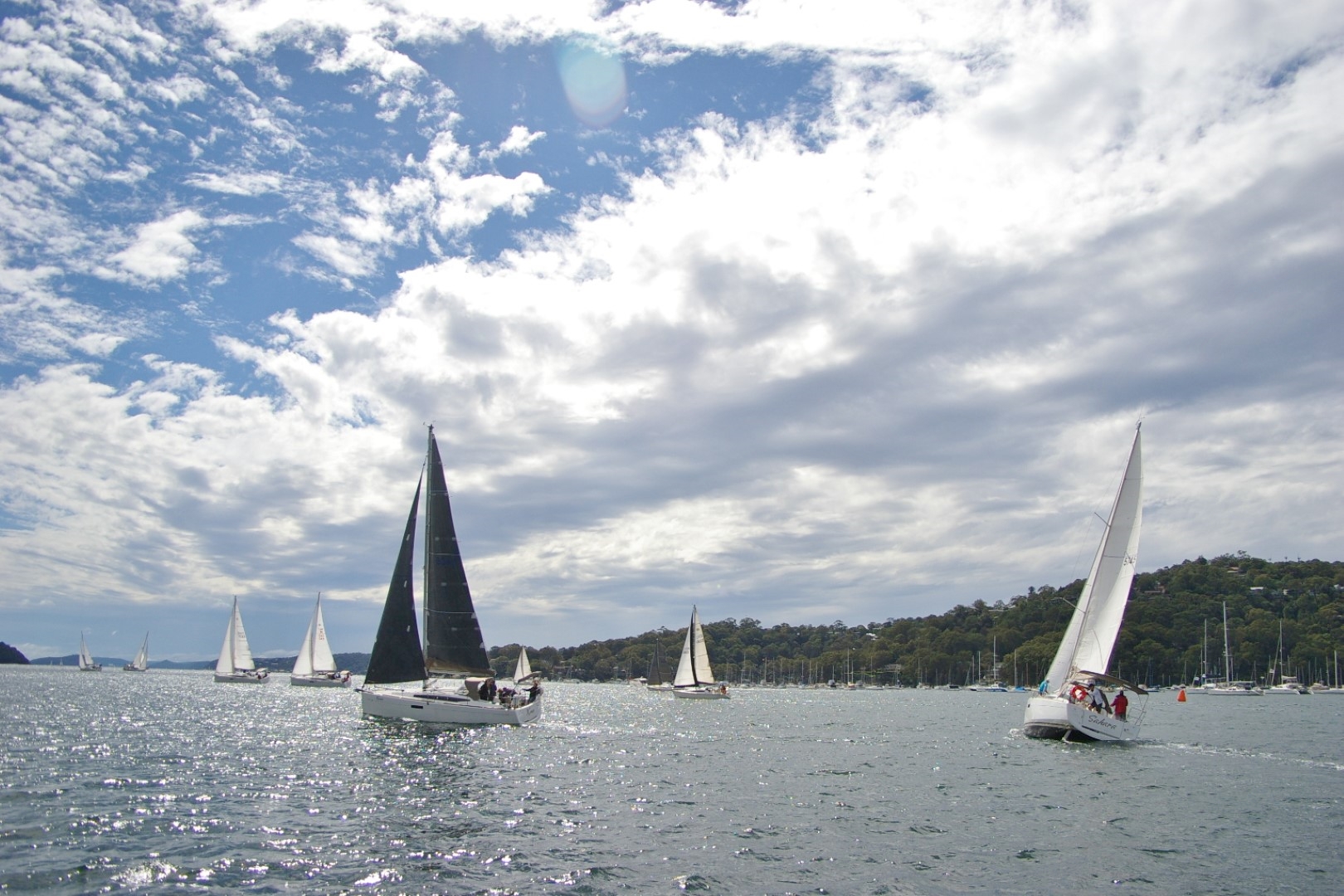 Heavy rain greeted those up early for our annual Performance Boating Jeanneau Rendezvous, this year held on Pittwater and the Hawkesbury, but by briefing time at 10am the rain had cleared as forecast for the 40 yachts entered covering twenty different Jeanneau models and spanning 28 years of production.

Our briefing breakfast at RMYC was generously sponsored by our friends at The Quays Marina and Q-Service, who also kindly allowed us to use their 40ft Protector RIB as a committee boat for the day. For the first time in some 13 years of hosting different Rendezvous events we decided to use a pursuit system for those racing to add some excitement for the fleet, and to also result in close finishing to allow us the time to host two races overt the day.

With a complex weather system it was difficult to predict anything other than a brisk Westerly late in the afternoon and all signs at the briefing were that a N’W breeze was filling in after the rain, and that there would be good breeze all day.

The destination for the day was Patonga on the Northern side of the Hawkesbury and the faster red division half of the racing fleet were given a course around Lion Island, while the remainder blue division were to sail directly to Patonga. With seven Sun Odyssey 349’s entered in the racing division it was decided to separate them into their own division to also sail directly to Patonga.

The cruising division set off at 11.30 with the pursuit countdown starting 10 minutes later, so the slower boats started first and over half an hour the entire fleet started and headed North in extremely fickle wind with lots of holes and different wind directions.

A decision was made to shorten the course as progress was slow, so this was announced and a finish line set at West Head. First over the line was the SO36i “Tango” who navigated the wind holes extremely well to win the first race in the blue division, while another SO36i “Allegria” wasn’t far behind to take 2nd in that division. The ever fast SO349 “Pinta Bay” was first home in that division followed closely by fellow 349 “Sahara” and then our demonstrator SO319 skippered by 349 owners David Kelly and Jim Ley on the day. The red division boats didn’t make up their time on the rest of the fleet, but first home was the Sun Fast “Midnights Promise” followed by the Sun Fast 36 “Campeadore” and importantly not far behind these two was the new SO419 “Shell”.

The fleet headed for Patonga after the finish where they took a break to have some lunch while we set a start line for the return, with the cruising division heading for home at 2pm as planned. Then the countdown started 10 minutes later. By this time a Westerly had settled in and was building as the later yachts started, with many of the red division carrying spinnakers or Assy’s. This time the red division did round Lion Island and as the yachts headed back South the wind became gusty and continued to build.

In both the blue division and 349 division boats were neck and neck the whole way with incredibly close finishes off RMYC. In fact there were several finishes where  boats were separated by only metres!

The first yacht home was a cruising division boat the SO35 “Sweet Love” enjoying the brisk breeze towards the end in particular. As the first blue division and 349’s approached the finish the wind really became much stronger and the unfortunate SO36i “Tango”, which had won the first race, blew out the clew of their headsail, but finished anyway under main only, however this put paid the their chances of a top 5 result. So the first blue division yacht which came storming home, much to the delight of its owners was the SO42i “Struggling Sailsman”, followed by the 44DS “sea Pearl” and new SO440 “Matakana”, which really enjoyed the breezy conditions. In the 349’s the husband and wife team on “Luna Fernando” in their first day of racing the yacht finished a very creditable 1st, followed by the consistent “Xena” and then “Eau Well”.

As the red division neared the finish they saw gusts of 38 knots, which is a challenge on any day, but interestingly the SO419 “Shell” worked their yacht best to beat the near sistership SO409 “Minnow”, with the well sailed SF36 “Campeadore” 3rd. A tough finish to a tricky but enjoyable days sailing.

From there the fleet returned to their berths or moorings and converged on the RMYC for a function which commenced with live music at 6pm. A very enjoyable evening was had by all, with the prize giving at 7.30 and spot prizes by our generous sponsors at 8.30.

In addition to the 1st, 2nd and 3rd place medals for each racing division 4th and 5th received a bottle of wine and our perpetual trophy, kindly donated some years ago by Jeanneau owner Willy Whyte, was awarded to the SO349 “Xena”. Every yacht that took part in the cruising division also received a bottle of wine courtesy of PBS. Without doubt the “Taffy” crew were ‘best dressed’ on the day, so well done to them for making the effort. Names were drawn out of hat for all of the spot prizes with every yacht coming away with something. Our special thanks to The Quays Marina for donating two $1,500 vouchers towards annual antifouling.

After much good conversation, banter, dancing and some singing the evening came to an end at 10.30 where those staying on moorings were delivered home. The end of another great Rendezvous!

Our sincere thanks to all of our sponsors on the day, being Boatcrewgear.com, Boat Stripes, Cosine Shipwrights, Club Marine, Harken, Marinetune, Michaels Boat Detailing, Ocean Phase Marine Electrical, On Deck Rigging, SB Marine Trimming, Skinners Shipwrights, but especially to The Quays Marina for their generous contributions.

As always a huge thank you to my team at PBS Damien, Jay and Nicola for their hard work in putting these events together each year, and a big well done to the entire fleet for coming along and making the day yet another memorable one.