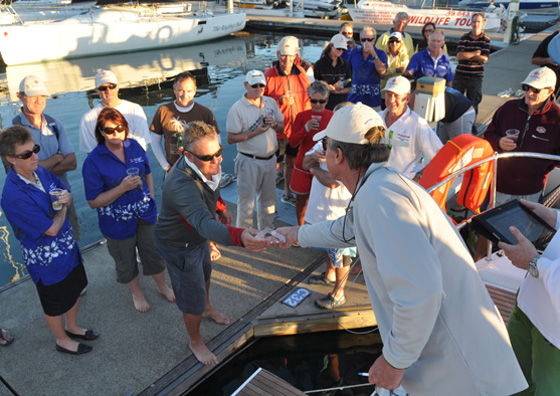 For our Performance Boating 2011 Rendezvous we decided to do something different and make a complete “Experience” of it by encompassing the Commodore’s Cup at Sail Port Stephens.

So, for sixteen eager Jeanneau owners it became a week long event with the Cruise in company, 75 nautical miles North to the stunning water of Port Stephens, 3 days of non-spinnaker racing, cocktail parties, drinks & daily prize-giving on the dock, then a day coach tour to the vineyards to Tyrrell’s for a Private wine tasting in their Special tasting Room, followed by the “Jeanneau Long Lunch”.

Throughout the 4 days we enjoyed the relaxed lifestyle Port Stephens has to offer, beautiful weather & a lot of fun times.

Race 1- described as the ‘pub to pub’ course took the yachts around the Eastern end of this huge waterway in a very fickle breeze where playing the current became critical. It was a 36 fest with the James & Cathy Radford’s SO36i collecting 1st prize, Martin & Judy Readman’s SO36i 2nd, and the Sun Fast 36 of Jonathan Threlfall 3rd.

Race 2-  started with gusts of 23 knots and a course out of the bay and around the Sovereign Islands just off the entrance of Port, so an exhilarating sail was had by all with Wayne Bank-Smith taking first on the SO42i followed by Murray Thompson’s 40DS and Peter Lewis on his SO37 3rd.

Race 3- took the fleet to the Western end of the Bay on another beautiful sunny day with 20+ knots at the start which progressively dropped as the race went on. Wayne Bank-Smith took the win again on the SO42i “Joie de Vie” followed by the Sun Fast 36 “Campeador” with the SO36i “Stella Blue” taking 3rd.

Although not awarded prizes for the individual races or Overall Jeanneau Prize, as it was being raced by Ron & his team of fishing mates, the new Sun Odyssey 409 “Mirage” kindly loaned by her owners performed extremely well taking 3rd overall in the “Commodore’s Cup Series”, and therefore would have been first of the Jeanneau’s. However with her out of contention “Joie de Vie” was 1st, “Campeador” 2nd & “Stella Blue” ended up taking home the 3rd Overall trophy.

All in all every one who participated over the week had a Great Time, forged many new friendships & eager to do it all again.

In the more serious “Port Stephens Trophy” end of the week “Joie de Vie” SO 42i  with owner Peter Byford as skipper finished a creditable 3rd overall in the Performance Cruising division.  Congratulations Peter!